Book Review: How to Be an American Housewife by Margaret Dilloway

""Once you leave Japan, it is extremely unlikely that you will return, unless your husband is stationed there again or becomes wealthy.

Take a few reminders of Japan with you. If you have room. Or make arrangements to write to a caring relative who is willing to send you letters or items from your homeland. This can ease homesickness.

And be sure to tell your family, "Sayonara." (from the chapter, "Turning American" )

Comments: This novel tells the story of a young Japanese woman who marries an American soldier after WWII and comes to live in America, becoming estranged from her brother Taro who remains bitter over the results of the war and the American bombing of Nagasaki.  In America, the young wife Shoko struggles to live among strangers in a different culture, and is given a book of advice by her American husband Charlie - How to Be an American Housewife. The story and the book are from the 1950s and the advice reflects the times.

Shoko's story is sad because of the estrangement from her brother, the hard time she has with English and raising her son and daughter in an environment unfamiliar to her, and also sad because of a secret she carried from Japan with her that she has told no one about. Redemption comes in the second part of the novel, when Shoko's adult daughter Suiko or Sue agrees to return to Japan for her mother, who has suffered a stroke and is unable to travel. Sue meets Shoko's cousins and reunites with Shoko's brother Taro, seeing Japan for the first time.

The novel is well-written and the characters, especially Shoko, realistic and sympathetic. The author based her book on her Japanese mother's experiences and the book that her father had given her mother to help her adjust to American society - How to Be an American Housewife.

This book was sent to me by the publisher through Shelf Awareness. My review and rating were in no way influenced by my receiving a complimentary copy.

Sunday Salon: Books to Start Out the New Year

Welcome to the Sunday Salon where bloggers share their reading each week. Visit The Sunday Post hosted by The Caffeinated Bookreviewer and It's Monday: What Are You Reading by Reading Date.

I haven't gotten much read over the holidays, but am into at least three different books that I pick up at random, in between chores.

Had to drive in to Chicago at 3 a.m. the other day to get our guests to their connection at O'Hare Airport. The sleet storm that followed canceled all or most flights, so we stayed over and cocooned indoors looking out at the Windy, Sleety City that had suddenly gotten cold, as winter is supposed to be. Our visitors finally made it out of Chi Town on New Year's Eve.

No new books in the mail....I did get to the library and found two books with an Asian theme to start out the new year. 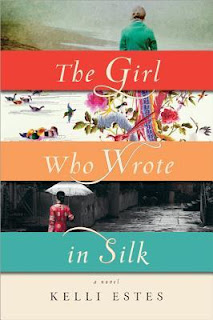 The Girl Who Wrote in Silk by Kelli Estes, published July 7, 2015 by Sourcebooks Landmark.

Inara Erickson is exploring her deceased aunt's island estate when she finds an elaborately stitched piece of fabric hidden in the house. As she peels back layer upon layer of the secrets it holds, Inara's life becomes interwoven with that of Mei Lein, a young Chinese girl mysteriously driven from her home a century before.

Through the stories Mei Lein tells in silk, Inara uncovers a tragic truth that will shake her family to its core — and force her to make an impossible choice.
Inspired by true events, Kelli Estes's brilliant and atmospheric debut serves as a poignant tale of two women determined to do the right thing, and the power of our own stories. (goodreads) 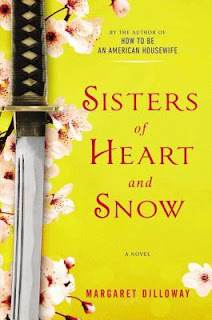 Sisters of Heart and Snow by Margaret Dilloway, published April 7, 2015 by Putnam.
The award-winning author of How to Be an American Housewife ( see my 2011 review) returns with a story of estranged sisters, forced together by family tragedy.
Rachel hasn’t returned  home since being kicked out by her strict father after an act of teenage rebellion. Drew, her younger sister, followed her passion for music but takes side jobs to make ends meet. When their deferential Japanese mother, Hikari, is diagnosed with dementia and gives Rachel power of attorney, Rachel’s domineering father, Killian becomes enraged.
In a moment of lucidity, Hikari asks Rachel for a book in her sewing room, and Rachel enlists her sister’s help in the search. The book—which tells the tale of real-life female samurai Tomoe Gozen, an epic saga of love, loss, and conflict during twelfth-century Japan—reveals truths about Drew and Rachel’s relationship that connects them in ways that turn their differences into assets. (goodreads)

I missed Dilloway's second book, The Care and Handling of Roses With Thorns, a novel about the art of rose breeding, published in 2012, but am adding this to my list of books to read in 2016.

Email ThisBlogThis!Share to TwitterShare to FacebookShare to Pinterest
Labels: Sisters of Heart and Snow, Sunday Salon, The Girl Who Wrote in Silk

How many books did you read and review in 2011 and which ones were memorable, your favorites, your top picks? I wouldn't have been able to make this list without my new and faster PC! At least I wouldn't have tried it. Happily, I managed  to make a list to keep track of my own reading!

I liked almost all of the books I reviewed, but the two-star books I really enjoyed. Want to know more about a specific book? Click on the book titles for the review.

The Demi-Monde: Winter
A Vine in the Blood **
Cinder (Lunar Chronicles) **
Me Again: A Novel **
Teed Up for Love,
So Far Away: A Daughter's Memoir of Life, Loss, and Love,
Shoe Done It,
The Goat Woman of Largo Bay,
Song of the Silk Road,
Borneo Tom: Stories and Sketches of Love, Travel, and Jungle Family in Tropical Asia,
Endangered (A Summer Westin Mystery),
Yoga Bitch, **
The Personal History of Rachel DuPree,
1Q84,**
As the Pig Turns,
The Economics of Ego Surplus,
The Last Chinese Chef **
The Last Blind Date,
Success Secrets of Sherlock Holmes; Dreaming in Chinese; The Gilded Shroud
Little Elvises,
The Ugly Sister, **
You Never Know,
Ding, Dong, the Diva's Dead,
A Rather Remarkable Homecoming,
The Stranger You Seek,
Three Women: A Poetic Triptych and Selected Poems,
How to Be an American Housewife, **

Thick as Thieves, **
Little Black Dress,
Naughty in Nice; The Tale of Castle Cottage,
Sanctus,
Death on Tour,
Help! For Writers,
Betrayal of Trust; and The Most Dangerous Thing, **
Pao: A Novel,
Death of the Mantis,
The Dog Who Knew Too Much, **
Brute Strength: A Dog Lover's Mystery
The Silent Girl,
The Perfect Suspect,
The Lantern, **
The Egyptian,
Spycatcher, **
A Bitter Truth,
A Cosy Knave,
Dragon's Pupils - the Sword Guest,
What Alice Forgot,  **
What Language Is,
Lost Memory of Skin, **
The Rules of the Tunnel,
To Sketch a Thief,
Tahoe Hijack, **
Tempest in the Tea Leaves; Till Death Do Us Bark,
In Search of the Rose Notes, **
Overbite, **
County Line,
Killer Move,

A Clutch of Cozy Mysteries,
Mercy, **
The Sweetness of Tears,
The Art of Saying Goodbye, **
Insatiable, **
Night on Fire,
Island Girl, **
Ink Flamingos, **
Death by Midnight,
Two Mystery Novels: Deadly Threads; and The Illusion of Murder
My Korean Deli,
Running on Empty,
The Civilized World,
The Long Goodbye: A Memoir; and Please Look After Mom **
The Eighth Scroll,
The Lock Artist,
Three Mystery Novels: The Case of the Missing Servant; Raining Cat Sitters and Dogs; and The Case of the Kidnapped Angel,
Mothers and Daughters,
Winged Obsession, **
I'm Going Where I Belong,
Mourning Gloria,
Bullet Work,
The Shepherd,
The Summoner, **
Dragon Chica, **
Call Me Irresistible,
If a Dog Could Blog,

Whew! That was a job! I have not included books I've read but not reviewed. I should have joined the 100 Book Reading Challenge! How about you? What were your memorable reads in 2011?