Out of the Nest 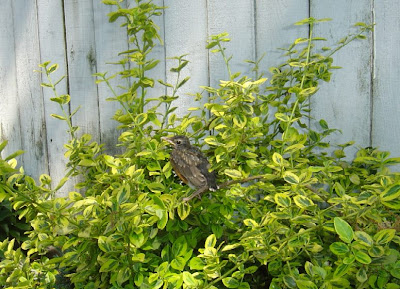 This fledgling robin was hopping along on the ground under some hosta and daylily leaves, intermittently squawking. It tested its wings and made it a foot off the ground into this euonymus bush, which must have reminded it of its nest, as it calmed down and sat quietly.

**
The young bird allowed me to get as close as a foot away to take this picture. Soon, an adult robin flew in and began a loud squawking, which the young chick answered. I left so that the adult bird could approach, but stayed close enough to continue watching.
**
The parent landed on the ground and approached the bush, and the young bird hopped down to join her. It followed her as she gathered insects from the grass to feed it. Soon after being fed, the young robin flew through a gap in the fence into another yard, away from its parent.

An hour later when I went back into the garden, two adult robins were squawking away on the wires overhead, with no answering call from the ground. One of the adults suddenly became quiet and I noticed the pachysandra leaves (a ground cover) around a maple tree rustling and waving in a straight line. A baby robin soon poked its head out from the greenery and eyed me curiously. I supposed it was not hungry as it made no effort to answer the adults.

**
I've heard of newly hatched chicks bonding with the first living thing they saw after emerging from the shell. This bird had been out of the shell for some time, but I didn't want to take any chances, so I left just in case it decided it should follow me for food!


When I checked later in the day, the yard was empty - no adult or baby birds within sight or hearing. I presume they all went together where birds go in the evenings to shelter for the night.
at June 08, 2007 1 comment:

I wrote this in 1999 on the web, one of my first attempts at reviewing a book online. I identified myself simply as "A reader."

After seeing several articles by newspaper writers upset at web reviewers, I revisited my old posting, one of the first 10 or so of about 68 done by reviewers/readers at the same site on the mystery, Murder With Peacocks by Donna Andrews (1999). 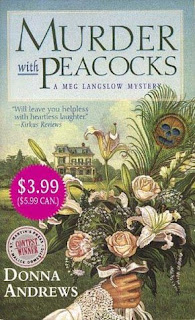 "13 out of 15 people found the following review helpful:

A delightful heroine, Meg, overworked, has amazing energy to organize three weddings for difficult brides-to-be, one of whom is her mother. In spite of a murder here and there and near-fatal "accidents," Meg tries to organize everything from fittings for gowns to addressing hundreds of invitations and even "renting" peacocks for her brother's wedding.

In between her hectic schedule, she tries to solve the murders as well, all the while hampered by demanding brides-to-be, relatives, an eccentric father and fatuous mother, and a host of zany characters. A fun book to read, as a mystery and as a comedy and good natured farce on weddings, their rituals, and the entanglements of a small town where almost everyone is related. Even the animals are fun - Duck, the Dog Spike, and of course, the peacocks.

The unraveling of the mystery leaves some questions unanswered, but it's fun getting all the way to the end."

Female mystery lovers who enjoy, or hate, weddings, you might enjoy reading this book.
at May 29, 2007 No comments: 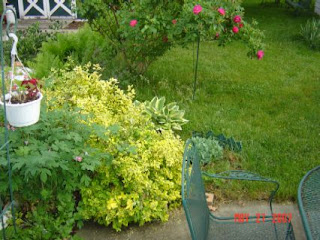 My early summer garden is visited by birds and lots of squirrels, but also by critters that take the heads off some of my flowers!
**
In the garden early this morning, using new birding binoculars bought on International Migratory Bird Day at a local state park, I saw blue jays, robins with worms in their beaks, a cardinal preening on a really high television antenna, a young hawk, and a pigeon with its beige under-feathers ruffling in the wind.
**
I heard lovely warblers but couldn't find them among the thick leaves of surrounding oaks. The migrating songbirds are miniature in comparison to the larger robins and blue jays that stay in this area all year round.
**
In the garden, the rambling rosebush in the photo will be full of roses by the end of next week. The bleeding heart bush in the forefront has finished blooming, but the yellow-green ornamental euonymus bush behind it lasts all summer and into the winter. A hosta edged with yellow and a sedum plant peep out to the right of the bush.
Here are my new efforts at digital photography! Hope you enjoy the yellow-green colors of my late spring garden!
**
For some lovely and very artistic nature photos, see the site of photographer Blue Heron: http://www.exploringnature.blogspot.com/
at May 27, 2007 3 comments:

Josh Getlin of the Los Angeles Times writes about the "Book Review Wars" and cites Michael Dirda, a Pulitzer Prize-winning book critic: "The book review section … remains the forum where new titles are taken seriously as works of art and argument, and not merely as opportunities for shallow grandstanding and overblown ranting."

As a blogger who rants about books, shallowly or not, I wonder... if blogger comments are as bad as Dirda claims, then why should he be worried? Could it be he think readers are tired of the traditional book critic's own "grandstanding and overblown ranting" and want to hear more from people like themselves?

In any case, people from the "lit blogosphere" have responded to Dirda and started a virtual war of words between the lit bloggers and the newspaper book reviewers - via the web, of course.

According to the following article, they have come to a kind of truce and agreement that they can co-exist in the world of books, and share the readers. See the complete story from the Los Angeles Times, May 13, 2007:
Literary Blogs and the Critics
at May 15, 2007 1 comment: 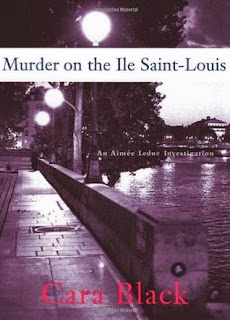 
The Art of Happiness: A Handbook for Living

The Dalai Lama was in a light hearted mood on that warm and sunny afternoon in Chicago, when he spoke before a crowd of about 11,000 people who had bought lawn tickets to see, or rather hear him speak, at Millenium Park in Chicago on May 6.

He joked about his meeting in the 1950s with Chairman Mao, who gave him "permission" to fly the Tibetan flag in a Chinese-occupied Tibet. He acknowledged that some of the crowd in the park were there to satisfy their curiousity about the Dalai Lama. He told them he was there to speak to them as a person, implying he was not addressing them as Tibet's 14th Manifestation of the Buddha, but as another man.

The casual and light-hearted atmosphere of the day was evident too among some of the people there to protect him. The African-American city employee who was there to tell the crowd what they could and could not take into the park also gleefully announced, "No marijuana! The Dalai Lama does not want to smell marijuana!"
.
When he focused on his topic, "Finding Inner Peace in a World Full of Turmoil." the Dalai Lama spoke of the need for compassion and for diluting anger by turning it into something more contemplative and analytical.

Here's a Chicago lawyer's point of view. See the link below. 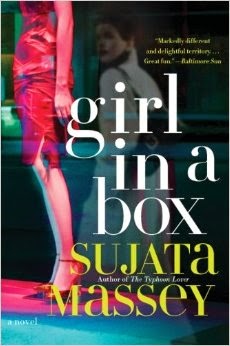 Sujata Massey herself is part Indian and part German, but grew up in California. She spent many years in Japan teaching English and studying Japanese and says that, in Japan, she feels more at home than in India.
at May 02, 2007 No comments: