Liu Xiaobo of China received the Nobel Peace Prize in 2010, during a lengthy prison sentence for his political opposition. During this detention, he also published the poetry collection June Fourth Elegies (Graywolf Press, 2012) and the essay collection No Enemies, No Hatred (Harvard University Press, 2012). He died, still in custody, on July 13, 2017. (from poets.org)

Poems by Liu Xiaobo,  and "Your Lifelong Prisoner"

It rained last night and into the morning, but that has all turned into a softly falling snow. It's rather nice, since I did chores yesterday and can stay in!

I'm in the middle of reading a great library find, World and Town: A Novel

It's about the scientist daughter of a missionary born in China, who helps a Cambodian family, fairly new immigrants in California. Her own life story and love life weaves into the story of the Cambodians, who are trying to fit into American life in a small town in the northwest.

My Christmas gift to myself was a Kindle. I have downloaded quite a few of the classics - Dickens, Jane Austen, Henry James, Dostoevsky, Tolstoy, The Iliad

, the Odyssey, The Art of War

, the sayings of Confucius, the Dream of the Red Chamber

Pride and Prejudice. I would not have even tried it except for having the books so available on the Kindle! So there's a positive!

I'm doing a blog tour on Dec. 16 for The Active, Creative Child: Parenting in Perpetual Motion by Stephanie D. Vlahov. Come back then for a look and some ideas on how to give your creative child the best guidance!

The snow is still falling, and it is pretty. The first significant snowfall of the season! Have a great week!
at December 12, 2010 6 comments:

Comments: My husband listened eagerly to the entire audio book version. That's a pretty good endorsement. He was somewhat disappointed though by the ending, as there were loose ends not tied up. He felt the author didn't quite know what to do with all the myriad characters he created in this awesome historical drama. He'll be glad to know that Sea of Poppies is only the first in the Ibis trilogy, and that the story is not over.

I was intrigued by the myriad accents put on by the eBook reader, Phil Gigante, and by the pidgin and Anglo-Indian words used in 19th century India. Gigante's voice versatility gave color and immediacy to the reading of the novel.

Goodreads book description: "At the heart of this vibrant saga is a vast ship, the Ibis. Its destiny is a tumultuous voyage across the Indian Ocean; its purpose, to fight China’s vicious nineteenth-century Opium Wars. As for the crew, they are a motley array of sailors and stowaways, coolies and convicts.

In a time of colonial upheaval, fate has thrown together a diverse cast of Indians and Westerners, from a bankrupt raja to a widowed tribeswoman, from a mulatto American freedman to a free-spirited French orphan. As their old family ties are washed away, they, like their historical counterparts, come to view themselves as jahaj-bhais, or ship-brothers. An unlikely dynasty is born, which will span continents, races, and generations.

The vast sweep of this historical adventure spans the lush poppy fields of the Ganges, the rolling high seas, the exotic backstreets of China. But it is the panorama of characters, whose diaspora encapsulates the vexed colonial history of the East itself, that makes Sea of Poppies so breathtakingly alive -- a masterpiece from one of the world’s finest novelists."

Book description from Goodreads:
Will Kiehn is seemingly destined for life as a humble farmer in the Midwest when, having felt a call from God, he travels to the vast North China Plain in the early twentieth-century. There he is surprised by love and weds a strong and determined fellow missionary, Katherine. They soon find themselves witnesses to the crumbling of a more than two-thousand-year-old dynasty that plunges the country into decades of civil war. As the couple works to improve the lives of the people of Kuang P'ing Ch'eng— City of Tranquil Light, a place they come to love—and face incredible hardship, will their faith and relationship be enough to sustain them?


Bo Caldwell based City of Tranquil Light on the lives of her maternal grandparents, missionaries in China in the early 1900s. She is also author of The Distant Lands of My Father 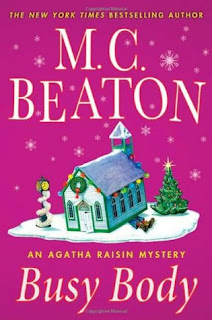 About the book: Agatha does it again - solves a couple of murders while helping her friends and employees of her private investigation company in Carsley, a village in the Cotswolds. Not a typical P.I. heroine, she is middle aged, heavyset with bear-like eyes, but with "good legs" and lots of raven hair. Her determination gets her through thick and thin and she has faithful friends. A former husband jumps in and out of her life as does a sometime lover, Sir Charles Fraith, both of whom play a part in the resolution of this mystery.

John Sunday, with the Health and Safety Board, is so detested by the residents of the neighboring village of Odley Creusis that it no surprise when he is stabbed, but no one in the village will say by whom, if they know. When another person dies, Agatha is hired by the son of the victim to find the killer. Attempts are made on the lives of two other people, and everyone feels the danger in the tiny village.

Comments: Another enjoyable cozy by the prolific M.C. Beaton, who writes two other mystery series set in the U.K. I liked the village setting, the mystery plot, as well as Agatha's personality.


"Discipline is Not a Four Letter Word.
Advocate for Your Child's Creativity." (ch. 4)

Book description from Goodreads: With an active, creative child, parents and teachers need to be flexible, energetic and smart! Here is a practical handbook for coping, establishing realistic boundaries and avoiding labels when you have a really inquisitive child. Active/creative children are often misunderstood by the medical community, by schools, and by their own parents. Their energy can be astounding; their curiousity is boundless -- and channeling that energy is necessary. This is encouragement and genuine help to support a child's natural curiosity and energy: * work with your child's energy, don't squelch it * keep your own ego from interfering with your child's passion * how to avoid over-stimulation * how to choose the best artistic outlets * how to choose the best teachers.

The Lacuna by Barbara Kingsolver 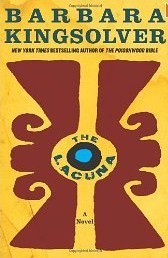 "It was a form of revenge to steal the pocket watch. Something he could keep from his mother for refusing to tell why she had gone off to the jungle." (from The Lacuna)


Book description from Goodreads: "In her most accomplished novel, Barbara Kingsolver takes us on an epic journey from the Mexico City of artists Diego Rivera and Frida Kahlo to the America of Pearl Harbor, FDR, and J. Edgar Hoover. The Lacuna is a poignant story of a man pulled between two nations as they invent their modern identities."

Love it when the authors read their own books. This is one of them, by Barbara Kingsolver, whose hardcover of The Poisonwood Bible

I enjoyed reading. The Lacuna is historical fiction set in Mexico and the United States. Though the main character, Harrison Shepherd, is fictional, others such as the artists Rivera and Kahlo are not.