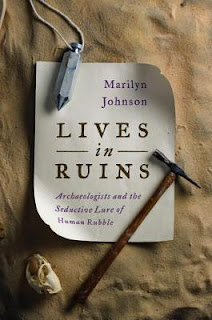 
DOWN AND DIRTY
Studying the people who study people

No dinosaurs appear in these pages. If you are looking for scientists who study dinosaurs, you want to pick up a book about paleontologists. This is about archaeologists - people who study people and the things they leave behind - their bones, their trash, and their ruins.

These brief excerpts from the book are from an uncorrected proof. The final copy may differ.


In Auel's hands (author of Clan of the Cave Bear), Ayla becomes a kind of ambassador between the slow, tough, paternalistic Neandertals and the flexible, innovative, woman-centered Homo sapiens.

The author of The Dead Beat and This Book is Overdue! turns to the archaeologists who sort through the muck and mire of swamps, ancient landfills, volcanic islands, and other dirty places to reclaim history for us all.

Where are the archaeologists behind these stories? What kind of work do they actually do, and why does it matter?

Marilyn Johnson’s book looks at the lives of contemporary archaeologists as they sweat under the sun for clues to the puzzle of our past. Johnson digs and drinks alongside archaeologists, chases them through the Mediterranean, the Caribbean, and even Machu Picchu, and excavates their lives. Her subjects share stories we rarely read in history books, about slaves and Ice Age hunters, ordinary soldiers of the American Revolution, children of the first century, Chinese woman warriors, sunken fleets, mummies.

What drives these archaeologists is not the money (meager) or the jobs (scarce) or the working conditions (dangerous), but their passion for the stories that would otherwise be buried and lost.

I am eager to get into this book. History and archaeology has always been an interest of mine!

Thanks to the publisher for an uncorrected proof of this book.
at October 31, 2014 9 comments:

First Chapter, First Paragraphis a weekly meme hosted by Bibliophile by the Sea. Teaser Tuesday is hosted by Miz B; choose two teaser sentences from a random page of your current read. 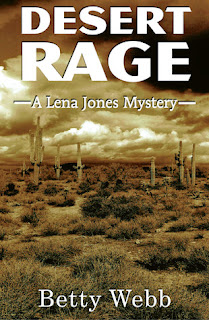 Desert Rage, a mystery set in Arizona, is interesting because the two teenagers accused of killing a couple and their young son are not the type to commit this kind of crime. Private investigator Lena Jones is asked to find out the truth, which is complicated by themes such as Asperger's Syndrome, surrogate egg donors and the resulting children, and the secrecy necessarily involved.


Prologue
The first thing Ali saw when she came through the door was the blood. The next things she saw were the bodies.
"Why'd you kill my dog?" she asked Kyle.

I hate that Lena person saying those awful things about Mom and Dad, even if she did say it just to make me talk. That my parents would, like beat me? as if! Dad never hurt anybody, he saved their lives, and Mom, God, what didn't she do for people, especially kids?

(ch. 14 from an uncorrected proof; final copy may differ)

My comments:  The book got better for me as I read along. At first I thought the novel sensational, with the horrific crime committed against a couple and their young son in their Scottsdale, Arizona home. Then the play of characters came in and I became hooked by the two teens, Ali and Kyle; the psychologically damaged but sympathetic ex-foster child turned PI, Lena; her caring partner in detecting, the Native Indian Jimmy; and a host of other intriguing characters connected to Lena's past and present.

Lena is hired to find the true murderers by a U.S. Senatorial candidate, Juliana Thorsson, who wants to keep her involvement a secret. Hunting down clues and tracking a multitude of possible suspects, she works to free the teens from prison as she fights to save her detective agency and protect herself from danger.

I really enjoyed this suspenseful mystery, its twists and turns, realistic characters, and hope to read more in the series. A great read for mystery lovers.

Thanks to Poisoned Pen Press for providing a galley for review.
at October 28, 2014 17 comments:

Welcome to the Sunday Salon where bloggers share their reading each week.Visit The Sunday Post hosted by The Caffeinated Bookreviewer; Also visit It's Monday: What Are You Reading hosted by Book Journey

I'm reading three books at the moment: a literary novel set in India,  The Folded Earth by A. Roy; Season of the Dragonflies by Sarah Creech, a book that includes some magical elements; and a mystery set in Arizona, Desert Rage by Betty Webb. 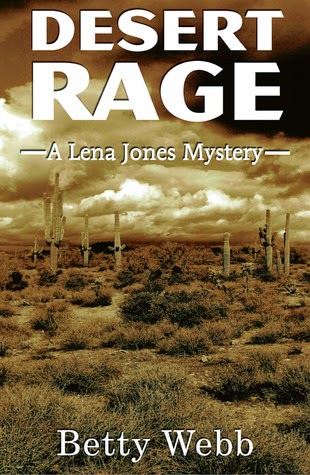 Desert Rage
.Desert Rage is interesting because the two teenagers accused of killing a couple and their young son are not the type to commit this kind of crime. Lena Jones is asked to find out the truth, which is complicated by themes such as surrogate egg donors, the resulting children, and the secrecy necessarily involved. I have just started the book and am curious about this involved plot.

Why read three books at once? I pick up a book depending on my mood and also depending on where I am in the house. One book may be in the living room, another in the kitchen, and a third may be in a bedroom.  A book per room. Why not? Do you find yourself doing this sometimes?
at October 25, 2014 17 comments: 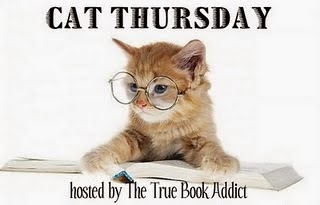 Welcome to the weekly meme that celebrates the wonders and sometime hilarity of cats! Join us by posting a favorite LOL cat pic you may have come across, famous cat art or even share with us pics of your own beloved cat(s). It's all for the love of cats! Enjoy! This fun meme is hosted by The True Book Addict. Go over to her site to join in the fun.

I wanted to join in Cat Thursday, but since I have no cats and may even be allergic to them, I enjoy them in books, cozies in particular. Let me introduce you to a Cat Mystery series that has this tabby as one of the main characters.

Fat Cat at Large is a cozy in the brand new Fat Cat Mystery series, written by Janet Cantrell. I'm sure cat lovers will love the cover of the book, which features Quincy, a plus-sized tabby that leads her owner into a mystery to solve.

Have a favorite cat?

Book Feature: No Time to Die by Kira Peikoff

Publisher's description:
Someone is out for blood—Zoe Kincaid’s blood. She’s a 20-year-old trapped in the body of a 14-year-old girl and her DNA could hold the secret of immortality.

Could it be the Columbia University researchers who see her as the key to fame and tenure? The shadowy figure, known only as Galileo, who is kidnapping the world’s best researchers? The Justice Department head who seems a little too intent on getting her alone? Or the maniac who just fed a leading scientist to his chimpanzees?  Zoe knows that unlocking the secrets of genome could save her beloved grandfather, a retired physician and former Olympian who grows frailer by the day. Can she trust the rogue physician whose secret lair hides discoveries that might just save her grandfather?

In Kira Peikoff’s biomedical thriller, science has barely begun to unlock the secrets written in our DNA. Researchers are hunting for the answers to chronic diseases, cancer, rare disorders and the biggest mystery of them all—aging—but at what cost?

Bioethicist Peikoff asks the most troubling scientific question of our time in this thriller: when does medicine cross the line?


KIRA PEIKOFF graduated from New York University in 2007 with a degree in journalism. After her first book, Living Proof, Peikoff worked in the editorial departments at two New York publishing houses. Peikoff is working on her third thriller, freelancing for a variety of major media outlets, and attending Columbia University's Master of Science program in Bioethics.

Death at Chinatown: An Emily Cabot Mystery by Frances McNamara

First Chapter, First Paragraphis a weekly meme hosted by Bibliophile by the Sea. Teaser Tuesday is hosted by Miz B; choose two teaser sentences from a random page of your current read. 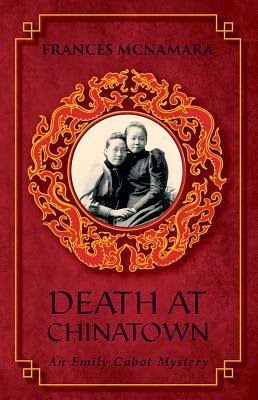 
"I son of Chou." "I son of Yang." The others proffered their papers and Lewis spread them on the table, where he began perusing them.


"Mr. Cormick here suffered injuries from a shotgun blast a month ago." The surgeon gestured and looked down, but I kept my eyes on the balding patch just visible on the top of his head. "We were unable to locate all of the pellets at the time of original treatment and he has been in continual pain ever since. Today, gentlemen...and ladies," Dr. Erickson said with a bow in our direction, "we will, for the first time, use a new technique which the German physician Dr. Roentgen discovered while experimenting with a Crookes tube." He paused to point at a round glass bulb mounted on a wooden stand.


Summer of 1896: amateur sleuth Emily Cabot meets two young Chinese women who have recently received medical degrees. When one of the women is accused of poisoning a Chinese herbalist, Emily finds herself in the midst of a murder investigation. But she must first settle a quarrel with her husband, help quell a political uprising, and overcome threats against her family. Issues such as restrictions on immigration, conflict between Western and Eastern medicine, and women's struggle to balance family and work, are woven throughout this historical mystery. Rich with details of life in Chicago's original Chinatown, this fifth book in the series will delight history buffs and mystery lovers alike.

I am eager to read this one as I am interested in the history of the Chinese in early America as well as historical mystery novels.

Based on the excerpts, would you continue reading?

I received a complimentary copy of this book for possible review.
at October 21, 2014 13 comments:

Mailbox Monday: An Old House, a Dog, and a Library

This novel has been on my shelves but I don't think I announced in Mailbox Monday when it arrived. Looks like a good read. Published August 19, 2014 by William Morrow.


Renovating an historic Memphis house together, three cousins discover that their failures in love, career, and family provide the foundation for their future happiness in this novel from the author of The Roots of the Olive Tree.

Nearing thirty, cousins Lizzie, Elyse, and Isobel face their own failures as they restore the almost condemned house. Lizzie seeks answers to a secret about her father. Elyse’s obsession with an old flame threatens her sister’s wedding, and Isobel is tempted to betray confidences that would damage her cousins.

Told in three parts by each of the women, this account of the restoration of a house built out of spite, but filled with memories of love, is also a story of friendships that help the women get what they need instead of what they want.

Other books that arrived: two cozies to be released November 4, 2014 by Signet.