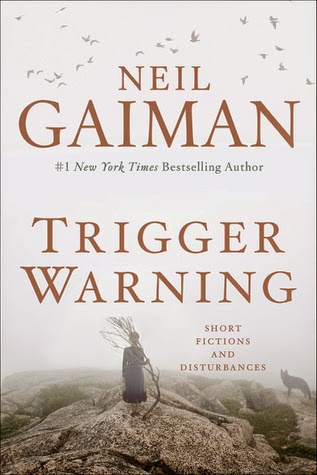 There are things that upset us. That's not quite what we're talking about here, though. I'm thinking rather about those images or words or ideas that drop like trapdoors beneath us, thrown us out of our safe, sane world into a place much more dark and less welcoming.Our hearts skip a ratatat drumbeat in our chests, and we fight for breath. Blood retreats from our faces and our fingers leaving us pale and gasping and shocked.

And what we learn about ourselves in those moments, where the trigger has been squeezed, is this: the past is not dead.


I said, "There are many for whom the lure of gold outweighs the beauty of a rainbow."
"Me, when young, for one. You, now, for another."

"Neil Gaiman pierces the veil of reality to reveal the enigmatic, shadowy world that lies beneath. Trigger Warning includes previously published pieces of short fiction--stories, verse, and a very special Doctor Who story that was written for the fiftieth anniversary of the beloved series in 2013--as well "Black Dog," a new tale that revisits the world of American Gods, exclusive to this collection.
Trigger Warning explores the masks we all wear and the people we are beneath them to reveal our vulnerabilities and our truest selves. Here is a cornucopia of horror and ghosts stories, science fiction and fairy tales, fabulism and poetry that explore the realm of experience and emotion." (publisher)

My comments: The basis of the book seems to rest on the idea that there are little words, incidents, events, or images that can trigger memories in us, welcome or not. Sometimes without warning. Books fall into this category for Gaiman as well as for me, a reader. I am eager to get into his stories and his thoughts written in prose and verse.

Thanks to William Morrow for a review/feature copy of this book. 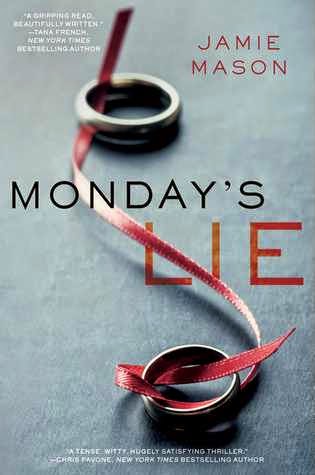 
It's funny what you remember about terrible things.
The scattered shards were far more beautiful than the crystal lamp they'd been an hour before. The clearest night sky had nothing at the foot of the stairs. The industrious back-and-forth of the man's shadow tricked the shimmer into life with his every pass.
If I'm ever a ghost, this will be one place they'll see me - the translucent drenched girl in pajama pants and soggy sweatshirt, hovering and shivering in the foyer. Part of me never left....

Book description:...a new thriller about a woman who digs into her unconventional past to confirm what she suspects: her husband isn't what she thought he was.

Would you continue reading, based on the opening paragraph?

Sunday Salon: Books for a Blizzard 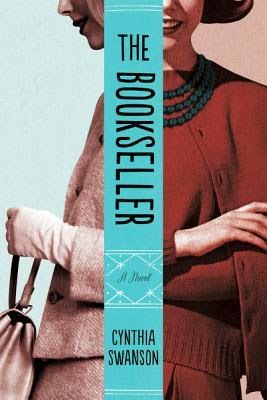 The Bookseller by Cynthia Swanson, to be published March 3, 2015;
Harper Collins 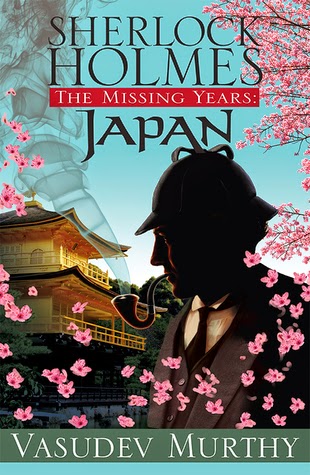 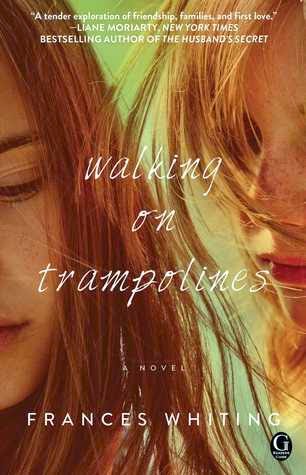 Walking on Trampolines by Frances Whiting, to be published February 3, 2015; Gallery Books 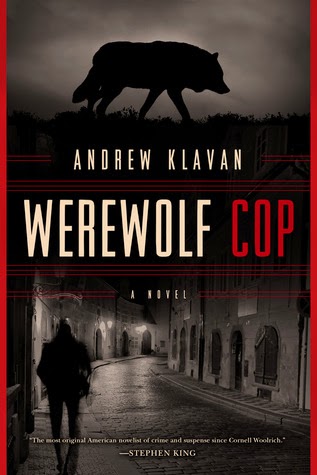 
Zach Adams is one of the best detectives in the country. Nicknamed Cowboy, he s a soft-spoken homicide detective from Houston known for his integrity and courage under fire. He serves on a federal task force that has a single mission: to hunt down Dominic Abend, a European gangster who has taken over the American underworld.

I am enjoying the blizzard today and tomorrow, believe it or not. We did our shopping and chores yesterday and can now cocoon indoors for the rest of the day.

What I've been reading: a thriller and a novel of manners and psychology. 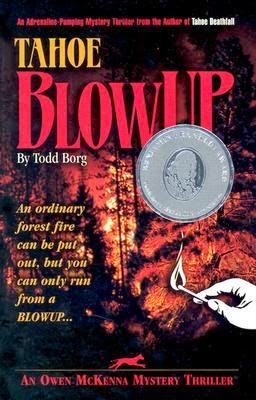 Tahoe Blowup (Owen McKenna #2) by Todd Borg, published September 1, 2001 by Thriller Press. A thriller set in Tahoe - from it I learned a lot about preventing and causing forest fires, besides arson, and the controversy over controlled or non controlled burning. I also learned about rescue dogs, the anthropomorphic qualities attributed to them that may not be so anthropomorphic after all. Dogs do have emotions similar to ours. A good thriller, the second in the series, the books only get better as they progress. There are now about 12 or so. 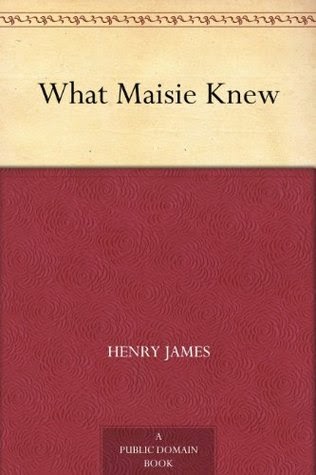 What Maisie Knew by Henry James, a free ebook on Kindle. I recently witnessed a divorce case and the effects on children, so this novel about a young girl being used as a pawn between two disagreeing parents was particularly interesting to me. Daisy is bandied back and forth not only by her separated and then divorced parents but later on by her stepparents as well. She comes out of it okay, had to pretend sometimes to be more obtuse then she really was, and in the process learns a lot just by observing the behavior of the adults around her. James is a master in the psychological novel. I discovered him later in life (after college, that is) and am a great fan of his.

What books have you finished this week? 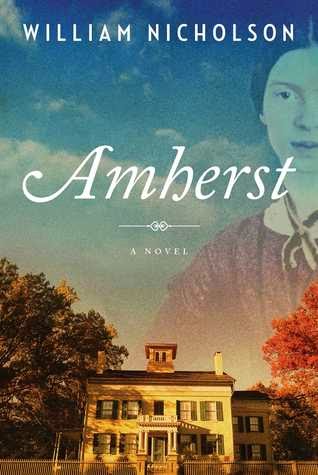 Amherst by William Nicholson, bo be published February 10, 2015 by Simon and Schuster.

The screen is black. The sound of a pen nib scratching on paper, the sound amplified, echoing in the dark room A soft light flickers, revealing ink tracking over paper. Follow the forming letters to read:

I've none to tell me to but thee

The area of light expands. A small maplewood desk, on which the paper lies. A hand holding the pen.
My hand, my pen, my words. My gift of love, ungiven.


"It's so like you to want to build a graveyard," his wife said to him. "Why are we to be always thinking about death?"

Book description:... a novel about two love affairs set in Amherst—one in the present, one in the past, and both presided over by Emily Dickinson.

Alice Dickinson, a young advertising executive in London, decides to take time off work to research her idea for a screenplay: the true story of the scandalous, adulterous love affair that took place between a young, Amherst college faculty wife, Mabel Loomis Todd, and the college’s treasurer, Austin Dickinson, in the 1880s. Austin, twenty-four years Mabel’s senior and married, was the brother of the reclusive poet Emily Dickinson, whose house provided the setting for Austin and Mabel’s trysts.
Alice travels to Amherst, staying in the house of Nick Crocker, a married English academic in his fifties. As Alice researches Austin and Mabel’s story and Emily’s role in their affair, she embarks on her own affair with Nick, an affair that, of course, they both know echoes the affair that she’s writing about in her screenplay.
Interspersed with Alice’s complicated love story is the story of Austin and Mabel, historically accurate and meticulously recreated from their voluminous letters and diaries. Using the poems of Emily Dickinson throughout, Amherst is an exploration of the nature of passionate love, its delusions, and its glories. This novel is playful and scholarly, sexy and smart, and reminds us that the games we play when we fall in love have not changed that much over the years.

What do you think? Is this a novel for you, as a reader? 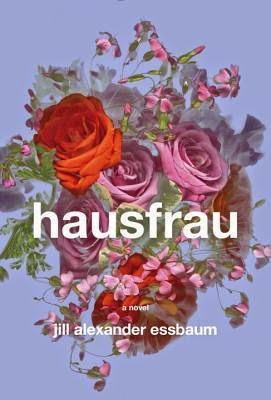 Hausfrau by Jill Alexander Essbaum will be released March 17, 2015 by Random House. I consider it general or women's fiction and rated it 2.5/5.

I enjoyed reading the first half of this novel about Anna, the American homemaker married to a Swiss and living near Zurich, becoming a hausfrau or German housewife. I could sympathize with Anna at the beginning for feeling isolated in a country with a different language and customs and a husband who becomes mostly unfeeling, unaware.

In the second half of the book, Anna becomes less sympathetic, acting irrationally, spinning out of control in spite of going regularly to see a psychoanalyst. I didn't feel she was a tragic figure, though the author tried to make her one. She seemed just a confused and contradictory personality.

The ending was unsettling as I found it disappointing and the overall character development not quite believable.

I'd love to hear comments from others who have read the book.

I received a review galley of this book from the publisher.

Two uncorrected proofs arrived from Harper Collins which I am looking forward to reading.

John the Pupil by David Flusfeder is to be released March 3, 2015.

It's described as "a medieval road movie, recounting the journey taken from Oxford to Viterbo in 1267 by John and his two companions, at the behest of the friar and magus Roger Bacon, carrying a secret burden to His Holiness Clement IV. The holy trio are tried by thieves on the road and tempted by all sorts of sins – and by the sheer hell and heaven of medieval life. ‘John the Pupil’ reveals a world very different and all too like the one we live in now."

A Dangerous Place by Jacqueline Winspear will be released March 17, 2015.

Spring 1937: Maisie Dobbs returns in a story of political intrigue and personal tragedy: a brutal murder in the British garrison town of Gilbraltar leads the investigator into a web of lies, deceit and danger.

Am on the last few pages of a book from my own collection, bought at a library sale:

The Art Thief by Noah Charney was published September 18 2007 by Atria Books.

It's about three simultaneous art thefts - a Caravaggio altarpiece from a church in Italy, a 20th century modern masterpiece from a vault in Paris, and another modernist painting just purchased for over six million pounds from an art gallery in London.

The book is worthy of a reader who is a chess master, as the plot is a challenge to follow and to keep all the pieces in mind. Math, figures, and art history, art forgery and events are put together in a complex pattern. Nevertheless, I had a good time trying to follow along. And the humor lightens it up here and there.