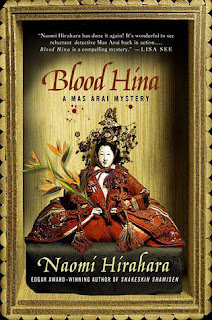 by Naomi Hirahara
Product Description:
In this fourth installment of Naomi Hirahara's highly acclaimed "Mas Arai" mystery series, Mas' best friend Haruo is getting married and Mas has grudgingly agreed to serve as best man. But then an ancient Japanese doll display of Haruo's fiancee goes missing, and the wedding is called off with fingers pointed at Haruo. To clear his friend's name, Mas must first uncover a world of heartbreaking memories, deception, and murder.

My comments: Getting new information from books, whatever the genre, is part of the enjoyment of reading.  I learned about Japanese Hina dolls, which were originally made out of paper to be cast out to sea in a boat, a ritual meant to have the dolls take all the bad luck and bad actions of a person with them, making them the equivalent of a scapegoat. The dolls later became a symbol of good luck for children, the family, and the emperor. They are made of more costly material and brought out on March 3 every year on Hina Matsuri, the Girls' Day Festival.

In Blood Hina, the disappearance of two of the valuable dolls is linked to the absence of Mas Arai's friend, Haruo. Then there are murders that deepen the mystery. The use of many unusual Japanese words and expressions in Blood Hina made me stop to concentrate on the translation and meaning, and Mas Ari's own strong accent transferred into English distracted from the flow of the plot and action. I enjoyed the first half of the book but got bogged down in the second half with the introduction of  many different characters. The information about Hina dolls made the book worthwhile, but I would have liked a smoother reading experience.

, an earlier book in the series that also features the Southern California Japanese gardener and sleuth, Mas Arai.