In 1940, a teenage blind boy named Danny Callahan witnessed the scuttling of the SS Tahoe Steamer, the grandest ship to ever sail Lake Tahoe. Eighty years later, a killer beats up old man Daniel Callahan, demanding to know the truth about a secret that went down with the ship. (publisher)

Mystery bookstore owner and amateur sleuth Tricia Miles overhears an argument in a bookstore, and later finds that one of the people in the argument has been killed.

I opened this tantalizing cover of a book at the library and found a dedication to  the author's mother, whose name I thought I recognized. Sure enough, the author is the daughter of a former college classmate of mine from over 50 years ago. We had lost contact, but are soon to be in touch. How amazing and exciting to recover a friend through this book!

Setting: island of Pate, off the coast of Kenya

Book description: a coming-of-age novel about a young woman struggling to find her place in a vast world--a poignant exploration of fate, mortality, love, and loss.

Memes:
The Sunday Post hosted by The Caffeinated Bookreviewer. Also,  It's Monday: What Are You Reading, and the Sunday Salon,  Mailbox Monday.
- July 28, 2019 10 comments:

Review: In the Heat of the Moment by Viveca Sten

I read this mystery series set in Sweden out of order, No. 1 and then No. 5, not that it matters as each book can be read as a stand alone mystery. The only carry over are the main characters, two police detectives, and the island setting, Sandhamn.

In this the fifth, the time is Midsummer Eve and Midsummer, a big celebration in  Sweden. This novel takes us to the island of Sandhamn, Swedish archipelago, where teens go to celebrate in droves and the police are out in full force to prevent violence, crime, or drunken tourists. The island dwellers mostly stay at home, knowing the crowds and the rowdiness that will prevail on pleasure boats and on land.

There is a murder on the island and some teens are missing, some are suspects in foul play, some found, interrogated, and grilled by parents and police. There is general mayhem among families, as well as mistakes made, one almost fatal.

I learned about the summer solstice celebration of Midsummer in Sweden, island culture, and much more in this novel, besides an interesting plot and some teen behavior that is mostly universal. A good mystery novel that I recommend. I  hope to read all eight in the series.

Here is the first in the Sandhamn Murder series, which I read last year.

This one I rated a five as well.

My review from goodreads:

The first in the Sandhamn mystery series, Still Waters is set in the Swedish archipelago with its hundreds of islands, including Sandhamn. The main characters are a police officer and his childhood friend, a lawyer, who try to solve the mystery of a man found dead, tangled in a fishing net off the island. Atmospheric and suspenseful, the novel has a good plot, interesting characters, and a splendid description of the picturesque islands in this part of Sweden.

What Rose Forgot, a novel by Nevada Barr


Rose's head jerks, drops, and she's awake. I've fallen asleep meditating, she thinks. It's been a while since she's done that. Over the years, an ease of concentration has incrementally developed. Staying awake is - was - easy. Eyes still closed, she sweeps her hands overhead, breathing in. The inner elbow of her right arm burns like a cigarette has been stubbed out on her flesh....


Rose, 68, wakes up frail, feeling like 100 years old, and finds herself on the grounds of a home for the mentally impaired, from which she seems to have escaped. She doesn't remember how she got there or why. After being hauled back into the maximum security home, Rose realizes she  doesn't belong there but is being drugged to make it seem as if she is mentally incompetent or suffering from ALS. Rose stops taking her medications, hides her pills, becomes slowly more alert daily, and plots her escape.

She not only has to get through locked doors, but find out who has done this to her - admitted her to this home from which no one comes out alive. Rose's husband has recently died, which leaves only her two stepsons and her 13-year-old granddaughter, Mel, the only one she thinks she can count on.

As the suspense builds, Rose, a former yoga practitioner, decides how to fool her caretakers in the institution and slither out of their grasp, with the help of granddaughter Mel and Rose's long-distance sister Marion. She also has to find out who committed her to the home and why.

I loved the intrigue, the unanswered questions posed by a tantalizing plot , and Rose's determination and quick thinking, at age 68. This was an entertaining read, which I did in just over a day.

This ebook was borrowed through NetGalley. Publication: September 17, 2019, Minotaur Books

Meme: Each week, Vicki at I’d Rather Be At The Beach hosts First Chapter First Paragraph Tuesday Intros where readers share the beginning paragraph(s) of a book they are reading or plan to read.
- July 23, 2019 3 comments:

I was able to finish this book in two days due to the scathing hot temperatures outside that allowed me to stay indoors and read.

The plight of two children, Danny and Maeve, grabbed me from the beginning - the story of a sister and her young brother whose mother disappeared from their gilded mansion in the Philadelphia suburbs and left them and their father in the care of a cook, a nursemaid, and a housekeeper.

The house in which they lived, called the Dutch house because of the previous owners, seems to be the center of the novel. The Dutch house is a large impressive mansion bought by the father, Cyril, for his family, but its opulence and size overwhelmed the mother, Elna, so much that she deserted it along with her husband and children. The house is later taken over by a stepmother, Andrea, who loves the house but not the children, Danny and Maeve. She banishes them from their home after Cyril's sudden death, leaving them impoverished and alone.

The house and their past family life continue to influence Maeve and Danny as they make their own future without the benefit of their father's house or fortune.

Intense and forceful, the story narrated by Danny, held on to me till the very end. The characters Elna and the stepmother Andrea are two opposites, distinct in their response to and relationship to the Dutch house.

A five-star recommendation. This was an ebook borrowed through NetGalley.

Genre: psychological suspense
A young  woman flees to a family estate in England, but finds not safety, but only danger, there.

Memes:
The Sunday Post hosted by The Caffeinated Bookreviewer. Also,  It's Monday: What Are You Reading, and the Sunday Salon,  Mailbox Monday.
- July 21, 2019 15 comments:

Book Beginning: All the Lives We Never Lived by Anuradha Roy


All the Lives We Never Lived by Anuradha Roy,  November 2018, Atria


Set in India during World War II and the present,  the novel is about a man's attempt to discover the truth about his mother.


In my childhood, I was known as the boy whose mother had run off with an Englishman. The man was in fact German, but in small‑town India in those days, all white foreigners were largely thought of as British. This concern for accuracy annoyed my scholarly father even in circumstances as dire as losing his wife to another man.


Dinu was older than me, at school he was my protector.


Do these excerpts grab you as a reader?Memes: The Friday 56. Grab a book, turn to page 56 or 56% of your eReader. Find any sentence that grabs you. Post it, and add your URL post in Linky at Freda's Voice. Also visit Book Beginning at Rose City Reader
- July 19, 2019 5 comments:

My review: This thriller deals with mothers and their daughters and the volatile and contradictory feelings mothers can have. In the case of one woman losing her child, whose heart was donated to another child, feelings change, develop, and the loss might be almost too much to bear.
Intriguing, suspenseful, and heart breaking all at once.

This review is part of a book tour sponsored by Berkley, Penguin Random House, which provided the review copy. 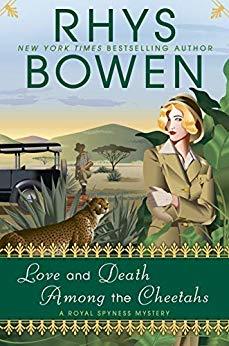 Mysteries and cozies are more and more using exotic environments and atmosphere to appeal to readers who may want something different from the traditional settings - bookstore, library, specialty and candy shops, local tea and coffee shops, bed and breakfasts, or hotels, etc.

I  have three new mysteries with an African safari theme, a Singapore setting, and a Budapest-style, Hungarian tea house.


Love and Death Among the Cheetahs by Rhys Bowen, August 6, 2019, Berkley Books
Setting: 1930s England and Kenya
Georgie and Darcy are finally on their honeymoon in Kenya's Happy Valley, but murder intervenes (publisher)