Sue Henry has branched out from her Alaska mysteries featuring dog musher Jessie Arnold, and has begun a new Maxie and Stretch series, featuring a retired widow and her miniature dachshund, Stretch. The widow, Maxie McNabb, spends the winters with Stretch motoring outside of Alaska, driving around the Lower Forty-Eight in her 30-foot motor home, spending a lot of time in the southwest.

She solves mysteries in Taos and nearby locations in the first two books in the series, all while sightseeing and camping out in her motorhome.

But the third book in the series is all about Maxie, without Stretch. 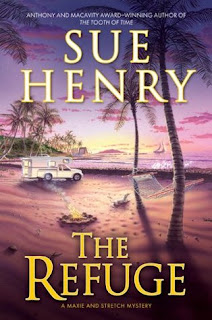 In The Refuge, Maxie leaves Stretch and her motor home in Alaska to fly to the Big Island, Hawaii, to help an old acquaintance, Karen Bailey, who has been injured in an accident and left with a cast on her leg. She needs Maxie's help to help her pack up and move back to Alaska, where she is from.

There are myserious circumstances surrounding Karen and unexplained attempted break-ins to the house in Hilo, Hawaii when Maxie arrives there. There is a suspicious stranger lingering nearby the house, and later on, a search of the house that leaves packed boxes torn open and contents trashed.

Maxie meets and hires a young man to help with the packing and shipping of her friend's belongings. Intending to work faster without having to take care of Karen too, she sends Karen on ahead to Alaska and works with the young man, Jerry, to finally ship and sell Karen's belongings.

After the packing and shipping has been done, they rent a truck camper to tour the Big Island while they wait for Maxie's flight back to Alaska. But the mystery surrounding Karen follows them around the island, even as they visit tourist sights such as Hawaii's Volcanoes National Park, the park's Kulanaokuaiki Campground, the Chain of Craters road, and The Refuge, a place of cultural and historical significance, where the mystery comes to a head and Maxie and Jerry barely escape with their lives.

The book's best quality is the description of the Big Island and the places you can visit and see with a truck camper. From this point of view, the plot is really just incidental. I chose the book because of the setting, and I wasn't disappointed in the virtual tour of Hawaii, with some mystery thrown in.
at June 28, 2007

I sent a link of this to my friend who used to live in Hilo. Thought she may enjoy reading it