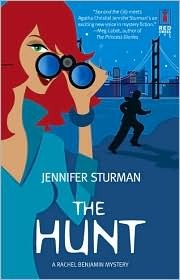 Set in San Francisco, a mystery by Jennifer Sturman, The Hunt, is the fourth Rachel Benjamim mystery novel, published in 2007. It involves a series of puzzles that the main character Rachel and her friends must race against time to decipher if they are to find their missing journalist pal, Hilary. Hilary had been last seen with The Igster, nickname for a former classmate who has made it big in Silicon Valley and who is on his way to becoming a billionaire with a new software.

Hilary may have found a flaw in this software, however, and is planning a major story to reveal this fatal flaw. Motive for murder? Rachel and her pals think so after Hilary disappears and sends them an SOS text message suggesting she is in danger.

A very enjoyable book with an interesting, witty, and somewhat unconventional main character, Rachel would rather follow puzzles and clues to find her friend than pick out crystal and plate settings with her future mother-in-law, or play tennis with her fiance's friends.

The Hunt could be considered Chick Lit Mystery, a new and burgeoning genre in the mystery field, except for Rachel's unconventional tastes. Though she carries a Blackberry and mixes with people in high finance and in the computer and public relations business, she considers herself odd in a world full of "normal" people. There are no bodies in this mystery, but lots of clues and of course, affairs of the heart, to add romance to the mystery mix.
at December 16, 2007