Book Review: A Concise Chinese-English Dictionary for Lovers. a novel by Xiaoulu Guo 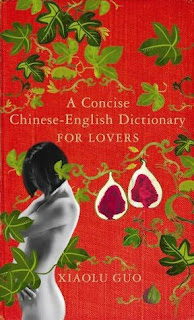 A Concise Chinese-English Dictionary for Lovers: A Novel

by Xiaoulu Guo
Published 2008 by Vintage

A student from China arrives in London for a year's study of English so she can return home and help her parents with their expanding shoe factory business. Zhuang is 23 and a reluctant student, who nevertheless carries around a Concise Chinese-English Dictionary and looks up and writes down almost every new word she comes across for the entire year in London.

A Concise Chinese-English Dictionary for Lovers, a new novel by Chinese writer Xiaoulu Guo, takes us in the heart and mind of a foreign student suddenly exposed to a strange culture. The student Zhuang tries to understand all the inconsistencies and contradictions of her new surroundings and the paradoxes of the English language as well.

She must also deal with her newfound sexual freedom and her relationship with an Englishman she meets and falls in love with but who is her opposite in many ways. Though they live together for almost the entire year, they remain very different. More Buddhist in his outlook on life, he finds her need for commitment and security too demanding and unnecessary. She, on the other hand, is frustrated by his apparent lack of concern for the future.

At the end of the year, Zhuang's student visa is not renewed, and she returns to China while her lover moves to Wales, a place he finds restful and peaceful but which she had found beautiful but cold, rainy, and gloomy.

I recommend the book for anyone interested in East versus West perspectives.

A poem by a young man who also values dictionaries with foreign words:
www.poetrymagazine.org/magazine/1207/poem_180287.html