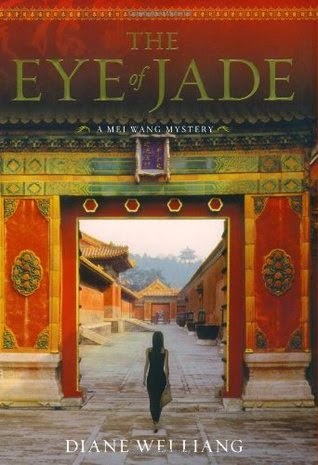 An armchair traveler like myself gets a kick out of reading books that combine mystery, adventure, and information about other countries. One of these is The Eye of Jade, set in modern day Beijing, where a young detective Mei Wang hunts for a missing piece of Han dynasty jade and comes across a murder in the process. The book describes interesting scenes from every day life in Beijing - the food, traffic, modern apartment buildings, the mixture of old and new, and life in the 1980s after Mao Tse Tung. The author, Diane Wei Liang, was born in Beijing and took part in the Tiananmen Square demonstrations in 1989, so I trust her observations.

I have also started The Abyssinian Proof by Jenny White. set in Istanbul, Turkey. The main plot is a little far-fetched, reminding me in this respect of The Da Vinci Code, as it's about a missing silver box, lost since 1453, that contains the proof of the existence of God. The main character, local magistrate Kamil Pasha of Istanbul, is caught up in the drama as the book takes up the story in 1887. Life in Turkey in the late 19th century is described in detail, and the city architecture features prominently. The book is written by a professor of anthropology at Boston University whose expertise is in Turkish politics and society.

And then there is The Moon in the Mango Tree by Pamela Binnings, which takes place in Siam in the early 1900s. An aspiring opera singer marries a young medical missionary who takes her to the northern jungles of Siam, now Thailand, where she is instantly criticized by older missionaries and their wives for being too modern and liberal in her views. She had been a supporter of the vote for women and marched at home in Boston with the suffragettes! A former lawyer, now novelist, the author must have done some serious research about Siam the the royal court at the time.
at July 03, 2008

I like Multicultural mysteries. This Jade one seems good.