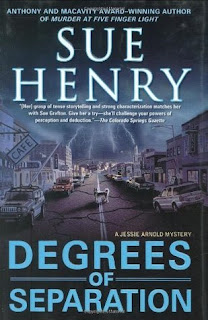 I knew there was a book waiting for me when I hotfooted it over to the library on Friday. There it was on the new releases shelf - Degrees of Separation by Sue Henry, a mystery set in Alaska, with its dog mushers and Iditarod dog races. I wasn't expecting the book, nor did I know about it before I caught sight of it, but the novel was just the thing I was waiting for. In other words, it fit the mood I was in.

Jessie Arnold, a kennel owner and dogsled racer, has started to train her dogs for the Iditarod again after being laid up with a knee injury. But first she has to take care of her ailing dog Pete, an old faithful who had run with her in several dog sledding races over the years. Jessie takes Pete in to the vet because of his breating difficulties and the vet advises her to let him go peacefully instead of letting him die at home with increasing painful breathing.

She does that, and afterwards takes old Pete home to be buried behind her cabin where other dogs also lie.

It's only a novel, but I was reminded of my own Harvey, whom I still miss, and who had to be let go in June because of his own breathing difficulties.

With the heart- tugger opening story of Pete, I'm now ready to read on as the novel moves to the mystery and the inevitable crime that Jessie will solve up there in snowy Alaska, in the middle of October, in her new book, Degrees of Separation.
at July 26, 2008