A Pale Horse by Charles Todd, a review 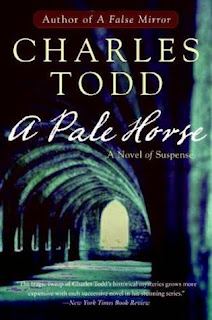 I found A Pale Horse by Charles Todd, a mystery set in the U.K., an interesting and well written book.

Setting: Nine cottages in Berkshire, England beneath a hill with a chalk horse etched out on its side, presumably by ancient Britons. One of the cottages has been empty for a while, once occupied by a man known as Partridge, who has "gone missing." No one has seen him recently, not his neighbor who feeds his cat in his absence, nor any of the other residents of the cottages.

Characters: Partridge worked for the British army during WWI, developing poison gases for the war effort. The British War Office has since been keeping tabs on him due to the sensitive nature of that work. When he disappears, Inspector Ian Rutledge is sent out from London by Scotland Yard to find him.

Mystery plot: Rutledge is also called on visit Yorkshire, a town where some young schoolboys have found a man lying dead in a deserted abbey, his face covered with a WWI gas mask. The schoolboys are convinced it's the work of the devil, and give no information to the authorities looking into the case. Rutledge clears the local schoolmaster of this crime after the local inspector falsely puts the blame on him. Rutledge begins to suspect the dead man is actually Partridge, the man the War Office wants to find.

Main plot: The mystery of Partidge's life and death and the effects on his family of his work on poison gases for warfare is the basis of the book's plot. There are several false leads and red herrings in the way of the truth, including the suspicious deaths of two of the other cottage residents in Berkshire, but with uncommon persistence, Rutledge is able to untangle the web to get to the heart of the mystery of Partridge, his life, the suicide of his wife, and the estrangement of his two daughters.

Historical relevance: The novel is set in the 1920s, just a few years after the end of the first world war. The theme follows early attempts to develop biological weapons.The seriousness of Inspector Rutledge job is offset somewhat by a subplot involving Rutledge's sister and her love affair, which, unlike Partridge's life, has a happy ending.

A goodbook for mystery lovers who are also history buffs. I would rate this police procedural/British mystery 4 stars.