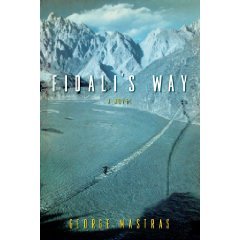 It took me the longest time to get through this book, which I wanted to read and finish, not out of a sense of duty, but because I was really enjoying it!

However, there are pages and pages of detailed landscape and people descriptions, background information on the area, political and geopolitical history, philosophical musings by all the characters, not to mention their personal histories. All these were important to the adventure/suspense novel, Fidali's Way,  nevertheless.

I kept going through all four parts, 60 chapters, and 385 pages of dense writing, partly because I liked the storytelling and partly because of the author's way with words. His descriptions of locale, people, their characters and their motives are quite compelling.

This is a love story involving two sets of people whose paths cross though they are from different backgrounds and cultures. Nick from New York, Yvette from France, and Simon from Scotland meet in India and Pakistan while backpacking and trekking in the volatile region. Nick flees Pakistan, wanted for two murders - one he didn't commit and the other an accident. Simon is in jail for murder. Yvette's recklessness leads to her undoing.

Nick, traumatized by his loss of Yvette, flees into India with the help of two tribesmen, Fidali and his friend Ghulam, and reaches the Brigadoon-like serenity of the village of Gilkamosh in the Vale of Kashmir. There Nick becomes involved in another love triangle - with the resident doctor Aysha and her childhood sweetheart, Kazim.

How these love stories play out against the backdrop of war, skirmishes, and terror attacks against Indian forces and the inhabitants of Gilkamosh by mujahedeen, is part of the intriguing plot that kept me going.

To cope with his past and the present, Nick learns from the seemingly simple and uncomplicated tribesman, Fidali, whose way of living and thinking leaves a lasting impression on him.


REVIEW OF THE MAP THIEF

How a map of Zheng He's travels lands up in the hands of the Portugese navigator to Vasco da Gama is the mystery the novel tries to solve. In present day New York, Mara Coyne, antiques finder, hopes to solve the mystery after being called in to investigate and recover a priceless 15th century map stolen from an archaeological dig in China. How did a copy of this map reach Portugal so many years ago? And where is that copy now?

The book takes you from New York, to China, and to Lisbon, and blends historical facts with fiction to explore an interesting theory regarding the first sailors to "discover" America and the New World.

Map Thief sounds really interesting. May check it out.

Both of these sound pretty interesting. I like stories that take place outside of the US because they make me take a map out and locate everything!!

btw: your link is wrong on Book Blogs for this review. For some reason it is www, instead of www.