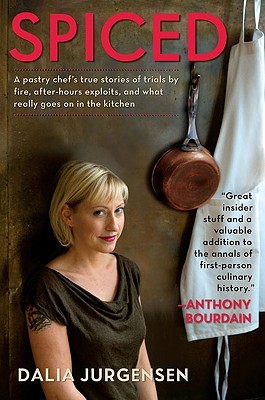 There are two things I really liked about Spiced, (2009) a book about becoming a chef and working in restaurant kitchens.

First, the inside info of the goings-on in the off-limits areas of restaurants - the good, the bad, and the funny. And second, the mouth watering descriptions of foods, their preparation, and the unusual pastries and desserts concocted by pastry chefs in three star restaurants.

It was interesting to learn that many chefs work long hours for just average wages, without health insurance, and hit the burn out point often, having to change jobs or rotate the types of food prep they do.

Dalia Jurgensen left her routine job in publishing to attend pastry school and work in a succession of restaurants, preparing appetizers, pastries, main dishes, and finally pastries again. She doesn't have much time to socialize; her off hours are often spent with her coworkers after work, winding down in bars at midnight after the restaurant is closed. She has surprising and not-so-surprising romantic dalliances with various chefs.

What I missed in the book, however, was a stronger story thread that would link up her restaurant and chef experiences and show a progression to the place where she is now. We know that later in her career, she was reviewed by food critics from top newspapers, but this was not an achievement she dwelt on or showed as a high point or culmination of her hard work under various chefs. At least, that was not a strong impression.

The book thus seems to be a chronological account of her career without that main theme to carry it all the way through. Even the ending seems to be "more of the same."

Her unusual desserts in the pastry kitchen, however, sound finger-licking good! Some simpler recipes and a taste of what her book is about can be found at her website, My Spiced Life.

Book provided by the publisher, Putnam Adult, for my objective review.
at April 21, 2009

I got your message via Book Reviewers on the Book Blogs board. This isn't a book I'd normally have read, but liked the review (very thorough and I liked how you interspersed the summary throughout instead of just plopping it at the front).

I think I actually might recommend this book (with a caveat) to my sister who's always craved going to culinary school... give her some of the benefits without the low wages.

Heather: It's an excellent book for your sister, I think. She will definitely be prepared for life as a chef if she decides to go ahead, even with the low wages and long hours!

I also saw your message via Book Reviewers on the Book BLogs board. I liked your review too and appreciated your honesty. You gave good analysis on what you thought worked and what could have been better- something I always look for in a book review. Nice job!

I enjoy foodie books and would probably like this one.

I always like reading the behind the scenes stuff!

I have this sitting on my shelf, the dessert descriptions are calling my name.