The Winner Stands Alone by Paulo Coelho, a review 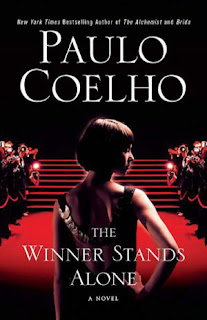 This is the first book by Paulo Coelho that I've read and I believe his first mystery novel.

I was immediately struck by the irony in the book, which blends a mystery/thriller plot with extensive social commentary.

The main character, a wealthy Russian businessman, Igor, attends the Cannes Film Festival in France to try to win back his ex-wife, who will be there with her husband, a famous fashion designer. Igor sends Ewa cryptic and menacing messages by email saying he will begin "destroying worlds" to win her back.

At the same time, Igor critically observes the crowd at Cannes - the Superclass as he refers to them, who set superficial standards for dress, behavior, and aspirations.

"Look at the Superclass around us. They think they are so important, so socially aware, because they are willing to pay a fortune for some useless item at a charity auction or to attend a supper organized to raise funds to help the homeless in Rwanda or to save the pandas in China. Pandas and the homeless are all one to them."


Igor becomes a social critic, a political critic, a critic of manners, and more, all the while showing that his socially conscious reasoning clashes with his personal life. How he tries to impress his ex-wife is devilish, to say the least, with the Angel of Death always hovering over his shoulder.

Coelho hints that Igor's "dual" character is like modern society, in that it can be rational and objective on the one hand, and wildly illogical on the other. Another irony in this psychological thriller is that Igor, driven by evil, has an unintended but positive effect on the life of a young model he meets briefly in Cannes.

In The Winner Stands Alone, Coelho writes a chilling thriller and also tackles the problems of the day with a critical eye - frank observations with just a tinge of cynicism.

Good review...Coelho is on my TBR list (the 999 challenge at LibraryThing for the award winners category.) I didn't realize he had written a mystery, and will definitely check it out.

Thank you so much for the blog award. What a wonderful surprise!
:)

Wow you've read this already huh? I saw this at the bookstore less than a month ago. I think I'll read this too someday :)

Mark David: After seeing your review of Coelho's The Alchemist, I knew I had to try reading one of his books, and this one came up! Hope you get a chance to read his social commentary!

Good review, I am currently reading Veronika Decides to Die by Paulo Coelho and am really enjoying it.

I'm a huge fan of Coelho's previous books (I've read them all), but this book is a disaster. I think the book is unworthy of the praise heaped upon it

Must be an enjoyable read Winner Stands Alone by Paulo Coelho. loved the way you wrote it. I find your review very genuine and original, this book is going in by "to read" list.