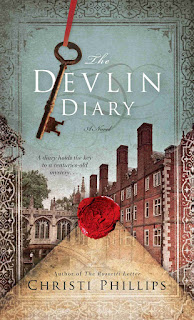 Christi Phillips of San Francisco, author of "The Devlin Diary," has her blog tour today, June 29, organized by Pocket Books Blog Tour. Christi is also author of "The Rossetti Letter," an historical mystery set in 17th century Venice which has been translated into six other languages.

Welcome, Christi. We're glad to hear more about your second historical mystery, "The Devlin Diary," and its setting in the politics of 17th century England.

Q: How and why did you choose this particular incident in history - the 1670 secret treaty between the English and French kings - to write a book?

Christi: I knew that The Devlin Diary would be set in England, because Claire Donovan, the main character in the present-day story, has moved to Cambridge to teach at Trinity College. Even before I began the novel, I was pretty sure I wanted to set it during the Restoration. It was such an intriguing time, especially in comparison to the Puritanical decade that preceded it. The Restoration era—which begins in 1660 and ends in 1685, essentially the reign of Charles II—can be thought of as the 1960s of the seventeenth century. Both eras ushered in sweeping social changes, a heightened creativity in the arts and sciences, and greater freedom for women. There was also lots of sex, drinking, drugs, and really, really bad behavior, which makes for great stories.

Then I read about the secret treaty in Antonia Fraser’s remarkable biography of Charles II, Royal Charles, and felt that it had the same sort of dramatic possibilities that the Spanish Conspiracy against Venice had provided for The Rossetti Letter. It was a real event that involved people at the highest levels of government and yet was still somewhat shrouded in mystery, so that I felt comfortable constructing a story that included fictional characters along with the real ones.


Q: I was impressed by the amount of research it took to write the novel. Could you tell us a little about what it required and the time you spent?

Christi: Primarily, it involved reading a great many books. This wasn’t really by choice; there just aren’t many other ways to learn about the seventeenth century. I spent six to eight months reading and outlining the story, then went to London and Cambridge for two weeks to tour the sites I would be writing about.There’s very little of seventeenth-century London left, but I found two small museums that were enormously helpful: The Old Operating Theatre in Southwark, and the Dennis Severs House near Spitalfields Market. At the first, you can learn about early medicine and the apothecary’s art; the second is a recreation of an eighteenth-century house in one of the most historic areas of London. I highly recommend both.

I also went to Trinity College, Cambridge. I was graciously shown around the college, allowed to lunch with the fellows at High Table, and generously provided with insider information about the college, which I share in The Devlin Diary.


Q: This is your second novel. How would you categorize/describe your two novels? Could you tell us about your background and your decision to become a writer ?

Christi: They aren’t easy to categorize, are they? When pressed for time, I call them historical mysteries. While not completely accurate, I think both The Rossetti Letter and The Devlin Diary will appeal to people who like historical fiction and people who like mysteries, so it’s a good working description.

As a child, I loved books and read voraciously (still do). I never really made a decision to be a writer, but by the time I was ten or so, I felt that I was one. So I wrote. Throughout my teens I wrote terrible poetry; in my twenties I wrote bad short stories. I didn’t write anything even remotely decent until I was thirty. I’m almost entirely self-taught. I’ve taken only one writing class, and I’ve never had a mentor. Happily, I had good friends who read what I wrote and commented on it.

I was very fortunate in that my friends were always kind and encouraging (even when, in my opinion, there was little reason to be). Although I don’t think I would have been daunted much by criticism; my need to write was too strong. I simply kept working at it until I got better at it, and could serve as my own best (or worst, depending on the day) critic.


Thanks for the interview, Christi. (See my book review of The Devlin Diary in the post below.)

You can visit Christi Phillips at http://www.christi-phillips.com

This is fascinating - how you developed on your own as a successful writer. It should give many of us hope!

Wonderful interiview! Thanks:) Twice I read mention of this author this morning-I'm totally intrigued and want to read all her books. I'm off to read your review now...

Great interview! I have been hearing many good things about this book--I just might have to pick it up!

Ms.Lucy and Jessica: Glad you liked the interview. I was surprised the author went into such detail, which I loved, but I understand writers can't help but write, and write.

I enjoyed the Rosetti Letter - I'll have to add the Devlin Diary to my reading list!

She sounds really interesting and I like that she never gave up writing. Very cool too that she's self-taught!!

Good interview. I like to read how the authors came about their books and writing.

Wonderful interview. I love the cover of the book!