The Girl Who Played with Fire by Stieg Larsson, review 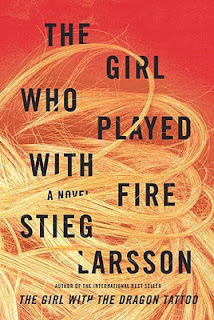 The Girl Who Played with Fire by Stieg Larsson
Published July 28, 2009; Knopf
Genre: thriller
My rating: 4 of 5 stars

If you liked Lisbeth Salander, The Girl With the Dragon Tattoo, you have a chance to see her again in the sequel by Stieg Larsson, The Girl Who Played With Fire.

From the publisher's description:

"Mikael Blomkvist, crusading journalist and publisher of the magazine Millennium, has decided to run a story that will expose an extensive sex trafficking operation between Eastern Europe and Sweden, implicating well-known and highly placed members of Swedish society, business, and government.

But he has no idea just how explosive the story will be until, on the eve of publication, the two investigating reporters are murdered. And even more shocking for Blomkvist: the fingerprints found on the murder weapon belong to Lisbeth Salander - the troubled, wise-beyond-her-years genius hacker who came to his aid in The Girl with the Dragon Tattoo, and who now becomes the focus and fierce heart of The Girl Who Played with Fire."

Blomkvist is reluctant to believe Lisbeth guilty of these murders. After all, he and Lisbeth went back a long way, taking part in a manhunt for a serial killer, a story told in The Girl with the Dragon Tattoo.

"During the manhunt he had met Salander. Blomkvist unconsciously stoked the faint scar that the noose had left beneath his left ear. Salander had not only helped him to track down the killer - she had saved his life."


Read the books in order if you can. Characters in the first book show up again in the second novel, and understanding who they are and how they relate to Lisbeth makes it easier to follow The Girl Who Played With Fire.

In the sequel Blomkvist and Lisbeth are together once again on the trail of murderers. The past comes back to haunt Lisbeth and seriously threaten her life. The ending chapters are stunning - a great thriller.

Book provided by the publisher for my objective review.

Email ThisBlogThis!Share to TwitterShare to FacebookShare to Pinterest
Labels: Book review, Stieg Larsson, The Girl Who Played with Fire, thriller

Thanks, Harvee. It's nice to see reviews of books by authors I don't know. And this author sounds like one who may soon be a big name. I've written down the name so I can look for him in the bookstore. (Love the cover, incidentally.)

Thanks for visiting, Helen.

Love your review. I need to read "The Girl with The Dragon Tatoo. Everybody talks about it.

I really want to read both books by this author soon; great review and thanks

Thanks so much for your review! I have a copy waiting for me to open up (after all the other obligations!) and can't wait! I love Lisbeth! And the ending of the first book just made me want more! Nice to know that the ending for this is even better!!

Sounds excellent. I have to read the first one though!!!

I have GOT to finally read Girl with the Dragon Tattoo... I think I've checked it out 3 times!

Hi Harvee! I became a fan of Larsson when I read the first book, The Girl with the Dragon Tattoo. I can't wait for the third book! I just feel sad that Larsson wouldn't be coming up with books anymore.

P.S. I also wrote a review of The Girl Who Played with Fire on my blog.

Hello everyone: Thanks for commenting on the post! I too am looking forward to the first book, Girl with the Dragon Tattoo. It's nominated for umpteen awards and may even be better than this sequel! Will have to read and see!

I really should read The Girl With the Dragon Tattoo soon...it looks way good and I heard great stuff about the sequel too. Thanks for the info and review.

Peter: I read your very good review! I also am sad about Larssen's death after finishing the three books in the Lisbeth series! He will be missed!

I really need to read the first one!