Book Review: Murder on the Cliff by Stefanie Matteson 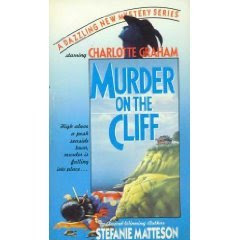 Murder On The Cliff by Stefanie Matteson

My comments: By lucky chance, I found this 1991 novel in a library book sale. It's an excellent mystery for several reasons: the location, use of history, and the characters and basic plot. If location is everything, then the Cliff Walk bordering the Newport, R.I. mansions, the mansions themselves built by the "robber barons," and the historic sailing town of Newport make it worthwhile. Add information on sumo wrestling culture, geisha culture, and the history of the first U.S. consulate to Japan opened by Townsend Harris in 1854 for a very interesting read.

The book is a poignant love story as well as a well crafted mystery.

Plot: The plot is based on the tragic story of  the geisha Okichi (made famous as Madama Butterfly in Puccini's opera) and U.S. consul to Japan, Townsend Harris. I was fascinated by the historical background, Japan Times online, Sept. 8, 2009.


"March 31, 1854, marked the end of some 200 years of Japan's "sakoku" isolation under the Tokugawa shogunate, when Japan signed a treaty with U.S. Navy Commodore Matthew C. Perry. The agreement set the stage for Washington to open trade negotiations with the shogunate, and also secure ports for American ships to rest and replenish supplies.

The first chief of mission was Townsend Harris, who presented his credentials to Emperor Meiji on Nov. 5, 1859, according to the U.S. Department of State. Harris, named a minister resident, opened the first U.S. Consulate at Gyokusenji Temple in Shimoda in today's Shizuoka Prefecture. The mission was later relocated to Zenfukuji Temple in Azabu, Tokyo."


"Nowadays Shimoda stages an annual "Carnival of the Black Ships" celebrating the U.S. opening of Japan to the West, and an actress assumes the honored role of Okichi." From Time Magazine online, 1956.

The mystery uses these historical facts, figures, and cultural events as its background.

Synopsis: In the novel, the main character Charlotte Graham, an Oscar-winning actress and amateur sleuth who once played the role of Madama Butterfly, is invited to a festival in Newport honoring the arrival of the U.S.'s Black Ships to Japan, and honoring the person on whom the Madame Butterfly story is based - the geisha Okichi, the companion of consul Townsend Harris in Japan, and their fictional descendants.

Two murders that seem to be related to Okichi and Townsend Harris' descendants occur during this Newport festival. Charlotte tries to put the pieces of the puzzle together, helping the local police to investigate, interviewing possible witnesses including the sumo wrestlers invited to the festival, and visiting the scene of both crimes.

this sounds GOOD! thank you.

This sounds really interesting. Isnb't it great when you take a chance on a book at a sale and it turns out to be good?