Review: After Dark, a novel by Haruki Murakami 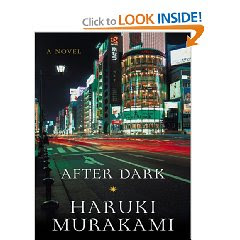 I decided to reprint this review I did in 2007 of Haruki Murakami's 12th novel, After Dark  for the Japanese Literature Challenge 3 hosted by Dolce Bellezza, which ends the end of January 2010.


Synopsis: The novel begins just before midnight in Tokyo and ends just before 7 a.m. The focus is Tokyo in the dead of night, after the trains have stopped running and the only public transportation out of the city is by cab.

Some of the people left in the city are college students and office workers. They are in the bars, hanging out in all night restaurants, in game parlors, or working late in the office.

The book follows a young college student, Mari, who decides to stay reading in a Denny's restaurant rather than go home. She meets another college student there, a musician who is in the city to practice with his band. At his suggestion, Mari leaves the restaurant to help a foreign woman who has been injured, and in the course of events, comes across unusual situations and makes some unlikely friends, including the manager and maid of an all night hotel. Long conversations during the night with the musician, who has met her older sister, help her come to terms with the reason she has avoided going home.

When morning arrives and the trains are running, Mari goes home to the suburbs, where she knows she will find her older sister, Eri Asai, still in a deep sleep. A beautiful and well-known model, Eri Asai has been sleeping steadily the past three weeks, getting up occasionally to eat, though no one has seen her when she is up.

Remembering how protective Eri Asai had been of her when they had been trapped in an elevator as children, Mari tries to empathize with her sister, in tears hugging her as if willing her to wake up out of her long dream. There is a glimmer of a response. Mari finally goes to sleep.

Comments: The novel only hints at the reason for Eri Asi's withdrawal. There is a suggestion that it involves the sinister office worker Shirakawa, whom Mari is unaware of though their paths overlap during the night in the city.

The novel has many levels of meaning. Murakami reveals the flip side of the city, after dark, at times with humor. The city at night also reveals the dark aspect of some of the characters he explores. However, Mari and the musician walk about the city and among these people, but remain unscathed.

Submitted also for the Lost in Translation Reading Challenge.

AFTER DARK was over too quickly, though - it left me with too many unanswered questions. (Which - considering the author - is ironic, I know.)

I much prefer the longer reads of SPUTNIK SWEETHEART and WILD SHEEP CHASE and especially KAFKA ON THE SHORE. Which, come to think of it, all still leave the reader with that unsettling feeling of "What was THAT all about?"

So maybe I need to go back and read AFTER DARK again ...

Have you read the Wind-Up Bird Chronicle? It's been on my radar for a long time, but it's a bit intimidating.

I was going to read one of his books for the Japanese challenge but I'm intimidated by him!

Great review there. This book was the first Murakami I had read, and it was the audio version as well. I did enjoy it --very different.

Chris: I'm still reading Wild Sheep Chase and trying to figure out what the sheep represent. If you have an idea, let me know!

Greg: I read the first three chapeters of A Wind-Up Bird Chronicle and was hooked!

Staci: After Dark is not at all intimidating and you might like the movie-like quality of the book.

Mel: I have to go over to the Japanese Literature Challenge 3 and read your review!

Diane: I didn't know it was on audio. Maybe I can get my beter half to read the book that way.

I was considering reading this one for last year's Murakami challenge but ended up reading After the Quake instead. Sounds like After Dark is a compelling story.. I'm adding it to my queue.