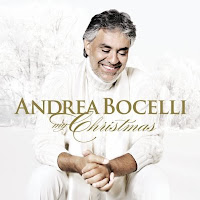 I watched tenor Andrea Bocelli's Christmas special on TV the other night and liked it so much, I went out and bought the CD, Andrea Bocelli: My Christmas for two family members and myself.

Loved "Blue Christmas" sung with country singer Reba McIntyre, "Chestnuts Roasting on an Open Fire" (opening lines) with Natalie Cole, and his "Jingle Bells" accompanied by the Muppets. The highlight of the album was the Lord's Prayer with the Mormon Tabernacle Choir, in English. I missed the "Ave Maria" however, which Bocelli sang on the Christmas show. That prayer is on the two-disc version of the album, along with more holiday songs, and is not included on the single CD that I bought. Too bad.

Bocelli sang in five languages - English, French, German, Italian, and Latin. A few of the songs were standard renditions of popular Christmas music, but most were interpreted in Bocelli's own style.

I love Bocelli!!! I missed the tv special though. Hopefully they will replay it again sometime this month :)

He was on The View this week. I need to get this for Christmas :)