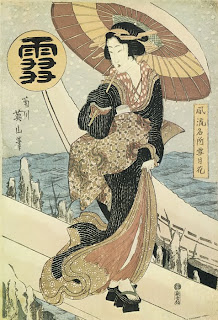 To celebrate reaching the 100 mark for followers of my blog, I've created an Asian theme with a Japanese woodblock print of a woman in a kimono and with links to a traditional Japanese celebration and to classical Chinese music. Hope you will enjoy them.

The print above is courtesy of Dover Publications. Today, the second Monday in January, is Coming of Age Day in Japan, a holiday when 20 year olds officially reach the status of adult and are able to vote, among other pprivileges.
In Japanese Customs and Traditions, Muza-chan has posted pictures of 20-year-olds dressed in colorful costumes to celebrate their coming of age. Though in formal kimonos, the young women chose bright, flowery patterns and have pinned flowers in their hair! There is also a video of a Coming of Age ceremony held in a Shinto shrine.

For Asian music, there are two videos of Classical Chinese Music performed in the Golden Hall in Vienna with traditional instruments such as the two-stringed erhu. Hope you enjoy them.

The Erhu music was a nice piece.

I have a picture from one of my friends in Japan of him with all of his friends on this day...some of the outfits are absolutely gorgeous!!!

Staci: What a coincidence about your friend! I've never seen such colorful kimonos!