Author Interview/Book Review: The Tricking of Freya by Christina Sunley 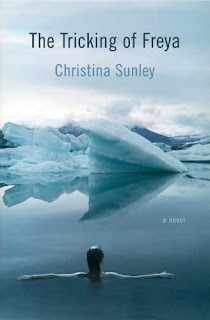 Q: Welcome to Book Dilettante, Christina! We'd love to hear how you came to write your first novel.


Christina Sunley, author of The Tricking of Freya: A Novel will discuss her book on Iceland and its history and culture. The daughter of Icelandic immigrants, her interest in history started with stories she heard from her mother.


Can you tell us the most interesting stories that prompted you to write the book?
Christina: There were two stories that my mother would tell me that especially struck me as a child. The first was of my grandfather as a young child in Iceland waking up to a morning sky black as night -- a volcano had erupted and caused widespread devastation in the area where he lived. The next story came from the following year in my grandfather's life, in 1876: impoverished by the volcanic disaster, his family set off on their shaggy horses under the midnight sun, crossed a river, and rode to the nearest seaport, where they took a ship to Scotland and then to Canada to join the "New Iceland" settlement. My mother also told me many stories about my grandfather's early experiences in the settlement, where they lived under harsh conditions as pioneers. I found those stories especially fascinating, and somehow haunting.


Q: What about the research you did to write the book - the time spent, the places you visited, etc?
Christina: Researching the novel was an incredible journey in and of itself. I made three trips to Iceland and one to Manitoba, and then did lots of reading, too, and pouring over old documents. I interviewed "old timers" in both Iceland and Manitoba, and met a number of relatives for the first time. A few experiences from my first trip to Iceland:

• Floating in a boat on a glacial lagoon – the same lagoon with its dramatic icebergs that years later is now featured on the cover of my book.

• Watching a sheep with spiraling horns climb on the ruins of the turf-roofed farmhouse where my grandfather had been born in another century.

• Riding a snowmobile over Vatnajökull, Europe’s largest glacier, and trying not to panic when it broke down in the midst of the vast icy wilderness.

• Trekking a still-steaming lava field in the north, where astonishing ribbons of lava seemed frozen in midstream, gleaming with the colors of undiscovered planets.

• Driving for hours by myself in a rented jeep and never seeing a single car or house or road sign along the way.

• And, of course, writing down absolutely everything I saw, smelled, heard or imagined in my notebook.

On my second trip to Iceland, I spent a month in Reykjavik taking an intensive language course in Icelandic. The next year, I spent a month as a writer-in-residence at Klaustrið (The Monastery), living alone in a stone farmhouse bequeathed by one of Iceland's most famous writers. It was just downstream from where my grandfather had been raised. I arrived at the beginning of May in the middle of a tremendous blizzard. It was so stormy most of the time I could hardly venture outside without getting blown over. There was nothing to do but write. I got more writing done in that one month than I had in the whole previous year.


Q: Is the town of Gimli in Manitoba, Canada a real place? Are any of the characters in the novel based on real people?Christina: Gimli is a very really place – in fact, it was one of the first places the Icelanders named when they arrived at Lake Winnipeg. Gimli refers to a kingdom in heaven in Norse mythology. Today Gimli is a tiny Canadian fishing village with strong Icelandic roots. They still hold a large Icelandic Festival there each summer, which I write about in my book. Only one of the characters in my book is loosely based on someone real. Freya’s family friend, Stefan, was inspired by an Icelandic-Canadian historian and genealogist named Nelson Gerrard, whose research and publications are a great inspiration for me. You can learn more about his work at Nelson Gerrard.

Q: You mentioned that only about 5 percent of your historical research findings went into The Tricking of Freya. How do you plan to use the other 95 percent?
Christina: Probably what I meant to say is that only about 5% of the historical material that I wrote ended up in the book. There were several chapters of historical fiction taking place at different points in Icelandic history that I ended up cutting out of the book. Although I’m not sure I’ll ever be able to recycle those chapters anywhere, it did leave me with a longing to write a historical novel about the Icelandic immigration.


Q: Have you always wanted to be a writer? At what point did you make this decision?Christina: My mother wrote my poems down for me before I knew how to write! I’ve always loved writing and started making “books” of stories and poems when I was about nine years old, but it’s something else entirely to declare oneself a writer and then manage to get writing done while living life and making a living….


Q: What are some of the books and authors that have influenced you over the years?Christina: I love Michael Cunningham, Michael Ondaatje, Virginia Woolf, Annie Proulx, Paul Auster, Halldor Laxness, to name a few. To the Lighthouse is probably my favorite novel of all time.

Q: Is there anything else you would like to add for readers?
Christina: I’m heading to Iceland for a book tour in June, where the book has been released in an Icelandic translation called Freyjuginning. Very exciting! At the end of March the paperback will be coming out in the US and Canada, from Picador, with a new cover and a readers guide for book groups in the back. I love talking with book groups, so if you have a group and are interested, please contact me through my website at Christina Sunley.

Thanks for the interview, Christina, and have fun in Iceland on your book tour in June! It should be beautiful during summer there.

The Tricking of Freya: A Novel by Christina Sunley

Synopsis: Young Freya has been tricked more times than she likes, both in big and small ways. The biggest trick begins with an unexpected trip, when she is enticed by her aunt Birdie to travel with her for three weeks to the land of their ancestors, Iceland, supposedly to find the lost letters of their grandfather, the famous poet Olafur, Skald Nyja Islands.

Freya normally lives in Connecticut with her mother Anna and only travels every summer to the small New Iceland community in Manitoba, Canada where her aunt and grandmother live. Freya is intrigued by her temperamental aunt Birdie, an aspiring poet who has manic highs and lows. In her good moods, Birdie teaches Freya the complex grammar of the Icelandic language and its folklore.

Following that first trip to Iceland with Birdie, a disastrous summer trip that seemed like a wild goose chase, Freya visits Iceland again many years later after Birdie's death, this time alone and to find answers about the past, the identity of a mysterious relative, and about the biggest trick of all that had been ongoing over the years.

Comments: I found this wonderful book at the library and borrowed it twice. The rich array of fictional characters created in the Icelandic community in Canada and in the homeland - from  traditional to progressive to manic personalities - makes this an engrossing story, expertly told.

I came away with a better understanding of Icelandic culture, the land and language, its folklore, and the history of Icelandic immigration to Canada beginning in the 1870s.  The Tricking of Freya was published 2009 by St. Martin's Press.

Other reviews of the book: Rose City Reader and The Boston Bibliophile.
(To have your review listed here, leave a comment with your link).