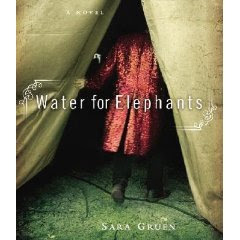 Water for Elephants is the story of a young man who runs off to join the circus during the Great Depression, leaving his troubles behind plus an unfinished veterinary degree from an Ivy League university. His vet training lands him a permanent job with the Benzini Brothers Most Spectacular Show on Earth, but life in the circus is not all the fun it seems.

There is animal cruelty, unscrupulous practices by the owner and manager of the circus, and unexplained disappearances of unneeded circus workers every so often. Jacob falls in love with an equestrian performer, Marlena, who is married to August, a circus boss. When August repeatedly beats the new elephant bull, Rosie. for not performing, Jacob and Marlena band together to protect the elephant and each other from the unscrupulous practices of August and the circus owner, Al.

Comments: I listened to the book on audio, expertly and entertainingly read by David Ledoux and John Randolph Jones, who were the voices of Jacob at age 90 and Jacob in his early 20s, remembering and telling the story.

Jacob at age 90 is delightful, telling us with humor his unhappiness with being confined to the nursing home where his family has placed him. Jacob at age 20 plus recounts his three and a half months with the Benzini Brothers Circus, his work with the animals, his love for Marlena, and how they survive the brutality of their bosses and environment.

I don't know if reading the book would have been as enjoyable as listening to the audio. I might have skipped over Jacob's complaints about his nursing home food and the other residents and missed a lot. Listening to the book being read was not at all boring but made Jacob endearing and made what he does at the end of his story entirely plausible.

Glad to hear you loved it too.

I loved this novel when I read it last year. It left a lasting impression on me! Good review, glad that you enjoyed it!

YAY, I loved this one too. It's so great to get some 5 star books now and then. Great review.

I have this on my TBR list, everyone that reads it seems to love it, I'm going to give it a try.

I can't get into audio books.

I haven't read this one yet - animal cruelty is just something I can't read - but it's good to hear it was awesome :)

Great review. I loved this book and recommend it to many people :)

Great review and I too enjoyed this book! :)

This book is on my 'to read' list. Glad to see another person enjoying it (everyone's recommended it to me) and I've got an award for you: http://allbookedup-elena.blogspot.com/2010/02/blog-award-one-lovely-blog.html

My favorite part of this book was the ending; such a delightful, unexpected slap in the face of being in the box. Which is a place I hate to be. The cruel trainer wigged me out, though, resembling far too closely someone I once knew.

Read this last year and loved it. It really gave me some thoughts about the circus during the time in this book. What you think is a great job - or at least as a kid I thought so - really sounds quite awful!

I'm so glad that the audio version is great!!! I loved this book and Jacob!

Loved this book and passed it on to both my daughters who thought it was great too!

Well written review!! Thank you for sharing and linking up to the party. I might try this on audio after reading your review.

I linked this book up to Cym's Review Wednesdays, too!

I loved this book. I agree, I like 90-something Jacob a lot. He's hilarious!

I loved this one, too.

My book group also read this book last year and loved it. It made for really interesting discussion.

I really enjoyed this one too. I'm not a audio book listener so I read it but it woul be one that I might be willing to listen to sometime too.

I loved this one too! I read it because I don't listen to audio. I liked the pictures that were included in the book. Haven't read anything else by this author although I might have to someday :)

I listened to this one on audio, too, and just thinking about it, I can hear old Jacob's voice in my head. Loved it.

Excellent review, I never listened to the audio but I'm glad it's good.

i didn't know what to expect when i bought this book. i had heard much about it so i decided to read it. it took me by surprise, left me speechless. very good storytelling and beautiful flashbacks.