Book Review: The Godfather of Katmandu by John Burdett 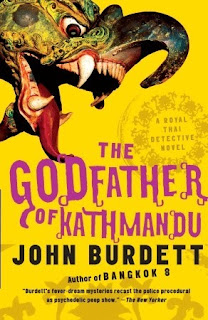 In The Godfather of Kathmandu

, a crime thriller with a twist
by John Burdett, Royal Thai police detective Sonchai Jitpleecheep must solve the bizarre murder of a wealthy American filmmaker in Bangkok.

Detective Sonchai is the son of an American father whom he never knew and a Thai mother whom he is devoted to. At the beginning of the novel, he doesn't know what to make of the apparent murder of the American visitor, a well known director of Hollywood films, whose death in a Bangkok flophouse is staged in a theatrical and shocking manner. Solving this crime takes all his effort and insight and introduces Sonchai to some very colorful individuals.

Comments: The personality and character of the detective makes and carries the book, no doubt about it. Sonchai is torn between doing the bidding of his corrupt superior
in the Thai police force, and following the directions of his spiritual Buddhist mentor, Norbu Tietsin. When these two people both pull him into an illegal transaction,
the detective is torn between duty, his sense of right and wrong, and the difficulty of his situation. He develops an ironic and sometimes comic view of himself and everyone around him by the end of the book.

"I'm supposed to be a mafioso, a despicable international drug trafficker, a poor sucker among six billion poor suckers ensnared irrevocably in karma from which there has never been any escape and for which therefore I experience no responsibility even if it is all my fault."

All clues seem to lead to Katmandu, Nepal, which Sonchai visits several times, getting information there and in Hong Kong, and back in Bangkok.

An incredible plot, I thought as I read along; I finished the book and gave it four stars. Burdett has written at least three other crime novels featuring Detective Sonchai Jitpleecheep, all entertaining semi-noir fiction.

(Also reviewed by The Book Catapult and Eurocrime)