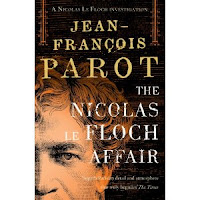 Two new mystery novels in the mail, these from overseas. I'm looking forward to reading them.

The Nicholas Floch Affair by Jean-Francois Parot
is the third in the mystery series by the author, a diplomat and historian.

Nicholas retains the confidence of those closest to him, and is even sent by Louis XV to London on a secret mission. But a plot is afoot to implicate Le Floch in Julie's death, and he faces the roughest challenge of his career as he fights to clear his name and bring the real murderer to justice.

Publisher's description:
"Physicist Helen Freyl has just accepted a job offer from a giant pharmaceutical company who are close to finding a cure for radiation poisoning. But when the mysteriously sudden death of a colleague is followed by another, Helen begins to doubt her employers' motives and realises that her own life is in danger, too.

Recently released from prison, David Marion didn't expect to find a hitman at his door. Warned that a powerful secret organization is after him, David goes underground and off the radar - waiting for the perfect moment to wreck revenge.

Venom brings David and Helen together as they fight for their lives against a backdrop of industrial espionage, corporate greed and human tragedy in this exhilarating and fast-paced follow-up to Joan Brady's bestselling Bleedout."