Welcome to the Sunday Salon! There are two very good books I read last week that I recommend.

by Yasunari Kawabata made me think of spring and my trip to the city of Kyoto in March 2008, just before the cherry blossoms came out.  I spent two days walking through the old districts and visiting shrines, including the Heian-jingu shrine, described in the novel . 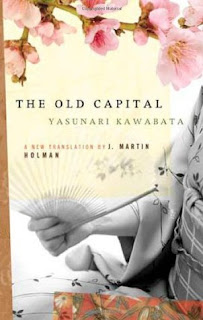 Comments: Kyoto in spring and during its many festivals throughout the year are the background for Kawabata's novel. It's an homage to the Old Capital of Japan, with its age-old temples, shrines, and gardens, and its history of artisans - silk weavers, pottery makers, designers of traditional silk kimono.

Here is a picture I took in Kyoto, the Old Capital.

This Torii, a Shinto gateway, is flanked by evergreen trees. It is one of the largest in Japan.

Plot: The main character in the book, a young woman named Chieko, finds out that she was a foundling,  adopted by her parents, a Kyoto kimono designer, Takichiro, and his wife Shige. Shige has always told Chieko she was found under the trees during cherry blossom time in the Gion district and kidnapped. The neighbors say she was found outside the lattice doors of her parents' warehouse, a foundling abandoned by her real parents. Chieko grew up privileged. Her discovery of who she might be leads to an interesting revelation in the novel.

I could picture some of the places described in Kyoto and I also liked the sense of beauty and love of the outdoors in The Old Capital. Chieko and her friends enjoy special trips to see the cedar trees, the mountains, the cherry blossoms in the spring that Japan is famous for. Inbetween festivals, Chieko also learns more about who she is and about her good fortune with Takichiro and Shige.

Yasunari Kawabata was born in 1899 in Osaka, Japan and became an orphan at age two. Also author of Snow Country

, and Thousand Cranes, he won the Nobel Prize for Literature in 1968.

. I've read all the books in the series and enjoyed every one!  A review later. Am now in the middle of a new library find,

My review of At Home with Laurie Ann, an interior decorator's guide, was posted Tuesday. A very colorful book.

I looted the library of about six other books, most of them mysteries. The covers, the titles, or the authors or all three combined convinced me to borrow them, even though I am way behind in my schedule of "many things to do."

Enjoyed the reviews. I'll have to check on the books.

Harvee..Th Old Capital sounds very good; I had never heard of it before, so thanks for blogging about it!

Harvee, The Old Capital sounds wonderful. And I love books with the backdrop of Kyoto! Your trip sounds wonderful too!! Your photo makes me want to go there myself. Thanks for sharing all these books today! Enjoy your week!

I'd love to see Kyoto one day - beautiful :)

The Old Capital looks interesting and it has a beautiful cover! Thanks for visiting my Salon!

What a lovely book cover, and the idea of this book sounds wonderful! Thanks for stopping by my blog.

Nothing like reading two good books back to back. I've yet to read Kawabata though my online group read him last year....I do have one of his books awaiting me....someday.

I *loved* The Old Capital! It turned out to be last year's 2nd best book :)

It must be even more awesome when you've seen the actual surroundings, like you did. I hope to visit Tokyo and Kyoto in the next few years!

Another thing on my to do list is write a review about this book ;)

You've had a great week! The Old Capital sounds very good... will get to Kawabata one of these days.

You had me at cherry blossoms! That book sounds wonderful. Hope you have a lovely Sunday.

I've never heard of The Old Capitol before but it sure sounds good. I'm with Ti on having me at the cherry blossoms. They are beautiful. Have a great Sunday.

This is the first I've seen The Old Capital, and it really looks like something I would enjoy. I'm drawn to stories about adoption. I'll be adding it to my wish list.

The Old Capital sounds like a good read. If only there were more time in the day to read everything we want to!

Kawabata is awesome. And since you were in Kyoto, you must have also seen the Kinkakuji (the Golden Pavilion) while you were there. It's famous and beautiful, and there's a wonderful novel written about the original Golden Pavilion, by Yukio Mishima. If you're looking for an excellent book of Japanese Fiction, you might want to try it.

NancyO, my unofficial "guide" didn't include thie pavilion in our two days of sight seeing. Maybe it was too far away by bus. Thanks for letting me know about it. I saw the pictures on the web - beautiful. And such a sad story connected to it. I have Mishima's book now on my TBR list. Thanks for suggesting it.

I'm so glad you loved it Harvee! The Old Capital is without a doubt one of the most beautiful stories I've ever read. If you would ask me one word to describe the novel, that would be it: beauty. The word beautiful just stayed in my head for every page of the book. As you might remember, I compared the atmosphere of Kawabata's writing to the sensation of catching a beautiful girl in my sight. It's so exquisite and endearing. This will surely remain as one of my most favorite writings of all time :)

The Old Capital sounds so great! I have to look it up. Stories set in Japan always fascinate me!

I like The Old Capital-to me the meaning and beauty of the work is in the images-there are well over 500 references to flowers, trees, and gardens in the work-great review-question-did you like it enough to seek out other works by the author?-

The Old Capital was such a lovely book, wasn't it? I'm glad you enjoyed it and that it brought back memories of your own trip to Kyoto.