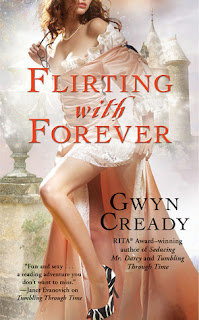 by Gwyn Cready (Mass Market Paperback, March 30, 2010)
My summary: Art historian Campbell Stratford finds herself transported to the 17th century while doing research for a book on the sex life of Dutch artist Van Dyke. There she meets Peter Lely, a former portraitist for Charles I. Peter lives in the Afterlife, is waiting for a new life from the powers that be, but is told he first has to stop Campbell from writing her book and smearing the reputation of the great Van Dyke.

When Peter and Campbell meet in the 17th century, sparks fly and they become romantically involved. She returns to the present, but he follows her to the 21st century, where she discovers that he has betrayed her.

My comments: As chick lit, the book's for mature chicks. As romance, it is sizzling in at least two lengthy 17th century scenes, though artfully done. As comedy, it is often clever and funny, as when Campbell tells the 17th century folk that her name is Katie Holmes and at another time, that she is a Spanish countess, wife of Antonio Banderas. As fantasy and time travel, the plot is original and the story well written.

The words that came to mind while I was reading this book: "Saucy! Spicy!" (Something Bruno might say before announcing his rating for a "hot" tango in "Dancing With the Stars"). This chick-lit time-travel romance is definitely for over age 18, I'd say. Make that over 21! The spiciness was thoroughly enjoyable however!

Gwyn Cready is a RITA Award winner and author of other time-travel novels, Seducing Mr. Darcy

and Tumbling Through Time

. I am tempted to pick them up as well, not for the eroticism, which I think is a bit overdone, but for the unusual fantasy, the humor, and what I suspect are more clever plots.

Thanks to Ayelet Gruenspecht of Simon and Schuster for a copy of Flirting with Forever, for my objective review.