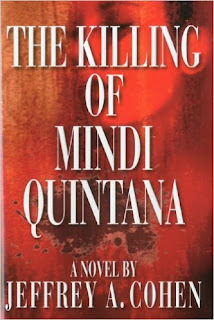 Guest post by Jeffrey A. Cohen, author of The Killing of Mindi Quintana

Welcome, Jeffrey. What can you tell us about your new crime novel?

As a Philadelphia lawyer whose novels always include some courtroom drama, I am often asked what it is that fascinates me so much about trials.

Well, it’s this: We pluck twelve people from life, call them society, and suspend time while an accused sits in purgatory waiting to be cast out or accepted back among us. An epic battle ensues. At stake is freedom for the accused, vindication (or what can be had of it) for victims, and fairness in the process for all of us. In short, it is justice that hangs in the balance.

As a child I would skip school, take the train to center city Philadelphia and watch criminal trials at our imposing City Hall. My father is a lawyer who had an office across the street; he’d circle trials for me in the Legal Intelligencer, and send me over. He considered what I’d be watching an education as important as anything I’d learn at school, and it certainly was.

Even for a child, it was easy to mark the transformation in the courtroom as the bailiff presented, and the judge took the bench, and the jury was seated. Only moments before, the lawyers and courtroom personnel had been milling about, at ease and informal, gossiping, laughing at a joke, shaking hands or pointing their hellos. Perhaps defendant’s counsel and the prosecutor had stood aside for a moment and chatted—this was usually amicable—and then returned to their tables to make notes, or the defense attorney to confer with the defendant. The judge himself might even have entered the hubbub from his chambers and almost unnoticed conferred with a clerk; or I might have glimpsed him on the phone through his open chambers door, already enrobed or in his suit.

But now, the courtroom called to order, informality evaporated like a disappeared smile. And I would watch amazed as these courtroom actors, these joke tellers and back slappers of a moment ago, slipped unmistakably, even awesomely, into roles much larger than themselves. This is how I experienced it as a child. And it hasn’t much changed, my reverence for the adversarial process by which we Americans render justice.

But, of course, justice isn’t always rendered. The spark for my novels is always an injustice, a particular miscarriage or a systemic problem. It will be an injustice that comes back to me in my thoughts over a long period of time, and increasingly gets to me, until I find myself considering how to expose and address it through fiction. Really what it is, is that I want to get to the bottom of it and understand it myself.

For example, the spark for my novel The Killing of Mindi Quintana was the true-life story of convicted murderer Jack Henry Abbott. Abbott became a cultural icon and literary shooting star when his book of prison letters, In the Belly of the Beast, was published in 1981.

One injustice of the Abbott case is that this evil man’s letters, irrationally justifying his lifetime of violent crime, resulted in public sympathy, literary acclaim, and even his parole. Another injustice, tragic, is that within six weeks of his release Abbott killed again, the night before a laudatory review of his book would appear in the New York Times. A final injustice—the one that got me writing—is that Richard Adan, the 22 year-old waiter Abbott stabbed in the heart for refusing him use of an employees-only restroom, was pursuing his dream of becoming a writer himself.

The Killing of Mindi Quintana deals with the injustice of fame and acclaim through murder. It takes issue with our attribution to our violent criminals of special talents, bravery, charisma and charm; our remaking of them as folk heroes and sympathetic anti-heroes. In The Killing of Mindi Quintana a frustrated department store clerk kills, and his little life turns big. The object now of fascination, he pens the book about his victim everybody wants, and drags her through the mud. A new celebrity murderer takes the stage. A comeuppance is in order.

I’m currently working on my second novel, A Plea for Leniency, in which a white-shoe criminal defense attorney has just lost his case defending a major corporate America CEO. Convinced he’s failed an innocent man, A Plea for Leniency is his unorthodox request of the prosecutor for compassion in recommending sentence. It is the truth about his client he could not tell in court. The novel takes us from Wall Street to the mountain slums of Rio de Janeiro; and from astounding business success to ruin, and in some ways back. We come to see that that this lawyer pleads for compassion not only for his client, but for himself. And we find reasons for mercy.

In A Plea for Leniency the injustice addressed is that of painting CEOs, in an age of popular anger, with too broad a brush; and the scant evidence upon which several high profile CEOs have been prosecuted. Not all corporate CEOs are crooks, not even all accused CEOs are crooks. Mine isn’t, yet he’s swept up in the cultural rage of the Enron and post-Enron eras, and he’s convicted. There’s no constituency for CEOs, maybe they don’t need one—but there should always be a constituency for those wrongfully accused of crime, and those convicted on too little evidence.

My comments:  I thought this was an interesting story about profiting from crime and the injustice of it. In this novel, the criminal is thwarted at the end, however, in a clever plan.

My only objection to the novel is the title, The Killing of Mindi Quintana, which gives too much of the plot away, right up front, especially since Mindi's demise is not until the middle of the book. I kept reading just to find out when and how, not what would happen. The book became more suspenseful in the second half, however, with a twist at the very end.

Thanks to Jeffrey A. Cohen for explaining legal thrillers and his book in such good detail and so convincingly.

TLC Book Tour provided an ARC of the book for this tour. Click on the link for other stops on the tour.