Book Review: The Queen of Patpong by Timothy Hallinan, a thriller

Teacher Suttikul snaps off the flashlight, and Kwan throws her arms around the woman. Hugging her teacher with all her strength, and with her own heart pounding in her ears, Kwan still hears Mr. Partison stop to wait for them, standing alone in the dark.

(ch. 8. This quote is from an uncorrected proof. The final version of the novel may differ. ) 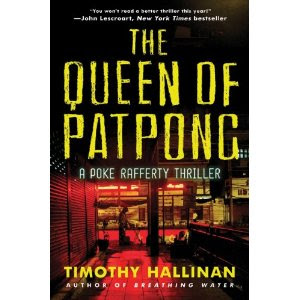 The Queen of Patpong: A Poke Rafferty Thriller

About the quote: Kwan is a bright, young teenager from the poor northeastern province of Thailand who is promised a scholarship to college by her teacher. How does she land up as a dancer in the red light district of Patpong Road, becoming the Queen of Patpong?

Fast forward to Bangkok many years later and to the beginning of the novel.  Kwan has changed her name to Rose, is happily married to travel writer Poke Rafferty and is the mother of their adopted daughter, Miaow. Rose's settled and contented life is shattered by the re-appearance of  a threatening man with a military bearing, an American who promises to shatter her life.

Rose tells her story to Poke and Miaow, how she became the Queen of Patpong, and how she believed she had escaped her past, which has now come back to haunt and threaten her.

My comments: The story of the Queen of Patpong, from her life in the village to dancing in the bars of Bangkok, to her escape from the stranger who now has returned, is the riveting story that had my heart pounding and my eyes glued to the pages of the book. A literary novel and a thriller rolled into one. The Queen of Patpong: A Poke Rafferty Thriller

has some of the most suspenseful scenes I've ever read in a thriller, and the sociological aspects of the story are heartrending. Hallihan has excellent descriptive power and knows his subjects and their environment well. I gave this novel five stars.

Thanks to the author for providing a galley proof of this book.

Review linked to Book Review Party Wednesday. Challenge: 100 + Reading Challenge,Thriller and Suspense Reading Challenge. (Teaser Tuesday is a weekly meme that invites you to choose two sentences from your current read to illustrate the book.)