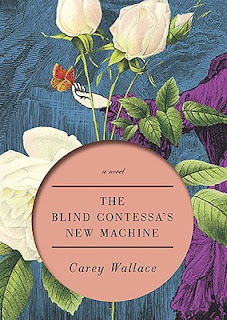 My comments: Wonderful descriptive writing, capturing the surroundings and the delicate feelings of the Contessa Carolina Fantoni during the gradual loss of her sight. We follow her amazing ability to cope with daily life.

The book is set in Italy in the early 19th century. I read it as the story of a young woman's coping with a new husband and home and the narrowing of her world visually. Carolina, the Contessa, relies on the devotion of a friend Pellegrino Turri, an inventor who creates and makes a typewriting machine for her to continue her correspondence with friends. Turri is also married, but his relationship with Carolina develops into much more than ordinary friendship.

Carolina also has her dreams, which allow her to create a new world for herself. I found this part of the novel lyrical and insightful, and the emotional journey of the Contessa poignant, her story bittersweet.

Here is an excerpt from page 86:


For those first several weeks, the darkness was complete. But then Carolina began to see again in her dreams.

At first the glimpses were so slim, they might only have been memories; the sun blazing through the new spring leaves, which seemed to be in danger of disintegrating in its rays; a box her mother kept by her bed, red cloth, embroidered with a white parrot; a silver bowl full of lemons.

The ending of the novel was an interesting surprise, subject to more than one interpretation, but the basic facts follow the true story of the Contessa and her intimate friend.

Here is what Carey Wallace, the author, has to say about her novel. Welcome, Carey!

1. What inspired you to write an historical novel set in Italy?


The evocative details of the actual invention of the typewriter inspired me to write the story: a beautiful blind woman, an inventor who’s inspired to create the first typewriter out of love for her, and the fact that they were both married to other people. The added fact that the typewriter really was invented in Italy was just another lucky element in a wonderful collection of historical scraps. But I was delighted to get to create a corner of a fictional Italy, since I think Italy occupies a special place in the imaginative landscape of the whole world: from the Greek and Roman myths that still dominate so much of western fiction, to more modern writers like E.M. Forster who find Italy to be a playground for the imagination – it’s a place where, at least in literature, anything can happen.

2. How much of your book is based on actual people and facts?


When the first typewriter was invented, nobody knew it was the first typewriter. The inventor wasn’t the same person who eventually commercialized it, so the historical details are scarce, but I did work within them. The typewriter really was invented by Pellegrino Turri for Carolina Fantoni, a noblewoman who went blind in her early twenties. Using the machine, they carried on a correspondence of only a few years, which ended around the time Carolina’s family moved away from the area. The original machine was returned to Turri’s family upon Carolina’s death, and it does not survive: only a handful of her letters that prove that she was in possession of the first machine to fit the modern definition of typewriter.

3. The description of the Contessa's gradual loss of sight seems very realistic. Do you have first hand experience with people who are blind or have lost their sight?


Thankfully, I don’t – although I’ve always valued the fact that my near-sightedness gives me more than one way to see the world. The descriptions of blindness in the story date back almost ten years, to a church retreat when I wound up in a room with a woman who worked for an eye doctor. Over the years, she had learned to read patient tests well enough that she could diagnose problems herself, and sometimes knew that a patient was destined for blindness before the doctor told them. This was a difficult weight for her to carry, and she spent several hours explaining different varieties of blindness to me in extraordinary detail. For years, I struggled to write about this experience. It just never seemed to fit anywhere I tried to put it. But over time, my writing went through a shift. Instead of trying to manage the trauma of the world through my work, or even to bear witness to it, I got interested in creating new worlds. Pain still had a place, but it was transformed. And the simple stories of modern patients struggling as they lost their sight finally emerged, reborn as The Blind Contessa’s New Machine.

4. How much and what research did you have to do for the novel?


As a writer, I’m interested in evocative scraps of history that provide jumping off points for the imagination. The story of the invention of the typewriter is an almost perfect example of this: a small but wonderful group of facts mostly garbled beyond recognition on the internet or collected with more accuracy in out-of-print books by typewriter aficionados. I tracked down the previously-printed facts thoroughly, but there weren’t many to find, which gave me the leeway to create with abandon around the kernel of the true story.

5. I was a little puzzled by the ending. Can you enlighten us a bit about your decision to end the novel in the way it did?

The Blind Contessa’s New Machine really has two distinct narrative arcs: one that tells the story of the romantic complications surrounding the invention of the typewriter, and a far more private story about a young woman creating a world of her own making to inhabit as blindness steals the sighted world from her. To me, that story is at the heart of the book, and has a true resolution by the end. The romantic arc, as with so many actual romantic arcs, doesn’t have such neat resolution. That’s deliberate: it’s meant to question whether the meaning of the book was ever really to be found in the romantic arc, and send readers looking for the meaning Carolina finds for herself, outside of the relationships she has with Turri and her husband.

6. Some of your favorite authors and books?


Penelope Fitzgerald is my favorite modern author. She began writing fiction to entertain her dying husband when she was already over sixty, and won a Booker Prize less than five years later. Her books are slim, intelligent, beautiful, and so strong you can get drunk on the first sip. She’s got a sharp eye, but a generous heart—a rare combination. And she can set her novels convincingly in Russia, Italy, or on the Thames. Julio Cortazar is the writer I name most often as my favorite: even in translation, his writing breaks into some category beyond prose, and his books work more like dreams than stories. I love Hawthorne best among American authors, followed by Raymond Chandler, F. Scott Fitzgerald, and Tennessee Williams, along with a deep affection for Cornell Woolrich, whose hypnotic prose I sometimes think works not in spite of but because of its imperfections. Dostoyevesky and Tolstoy are always the cornerstones of anything I’ve managed to learn about books, balanced on the side of wonder by Borges and Marquez. A portrait of the Bronte sisters, with their brother Branwell painted out, has hung over my desk since I was a teenager. I’ve read both Gone With The Wind and The Count of Monte Cristo many times. I read Thomas Merton almost daily. And Flannery O’Connor helps me in a host of ways, not least of which is her sheer cussedness.

7. Are you working on another book at this time?


I am working on five other books: one about a girl who falls in love with a ghost who can’t remember who he was before he died, one about the secret bride of a train robber, one about a young vampire, one about the relationship between art and faith, and one about my family’s experience with my mother’s chronic illness, lupus – the disease that killed Jack London and Flannery O’Connor. This is no guarantee, however, that any of these will be the next to appear.

8. Is there anything else you would like to add for readers?


Just my gratitude to them for being readers. The noise and demands of the world get more crushing every year, and no other art form demands as much imagination, attention, and time from people as a book. I think it’s a small miracle every time someone makes the choice to read, and I hope you’ll find The Blind Contessa’s New Machine offers you a real gift in return.

9. How can readers reach you?


I’d love to hear from people through my website: http://www.careywallace.com/, or directly at theblindcontessa@gmail.com.

Congratulations again on your novel, Carey, and we wish you the best!

About the author: Carey Wallace grew up in a small town in Michigan. She is the founder of the Hillbilly Underground, a retreat in rural Michigan that draws international artists. She lives in Brooklyn, New York and is at work on five other books.
at July 09, 2010

An unusual subject and one if handled with delicacy must be really good reading.

Really enjoyed the interview. Though I am on a paranormal kick right not, I love historical romance.

She's working of five books at the same time?! What am I doing wrong ? ;)