Women's Fiction: The Behavior of Moths, and The Seamstress

Just entered The Elegance of the Hedgehog

by Muriel Barbery into Book Seer

to see what Amazon would recommend as my next read.

Up came two enticing books, both about two sisters, one in Brazil, and the other a gothic mystery. 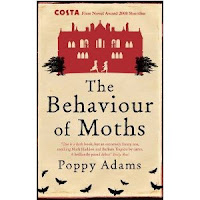 by Poppy Adams (2008) is about a weekend reunion of two "batty" sisters in an old and huge crumbling house. There is a moth/butterfly theme of something fragile and kept under glass, so to speak. An atmospheric, psychological novel described as a gothic mystery that is "dark but funny."

Then the next recommendation was  The Seamstress: A Novel

by Frances De Pontes Peebles (2009), a story set in Brazil in the 1920s and 1930s, about two seamstress sisters whose lives take different and divergent paths. It's described as "lavishly detailed" with excellent characterization, though a bit overlong.

I loved The Elegance of the Hedgehog, so if these two books are anything like it, in writing and content, then I should enjoy reading them. Two more for my TBR list!
- September 02, 2010

Email ThisBlogThis!Share to TwitterShare to FacebookShare to Pinterest
Labels: the behavior of moths, the seamstress