Book Review: Defending the Enemy by Elaine B. Fischel 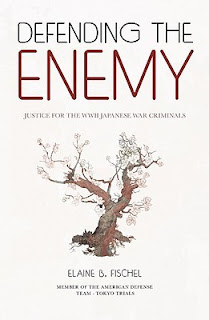 About the Author: Elaine B. Fischel was born in New York. The end of WWII found her working in Tokyo for two-and-a-half years at the trial of the 28 accused Japanese war criminals. General Douglas MacArthur, the leader of the Occupation, recruited American lawyers to defend the fallen leaders to insure that history would say this was a "fair trial." Elaine's assignment to the Defense enabled her to interact with the fallen leaders... and with military leaders, diplomats, the Japanese royal family, and Japanese citizens from all walks of life. When the trial was over, Fischel returned home and attended the University of Southern California School of Law. She went on to practice law for 57 years. (Book description).


Product Description:
Defending the Enemy is an eyewitness account of an extraordinary time in America's history - the "Tokyo Trials." From 1946-48, Fischel worked in Tokyo alongside the American attorneys assigned to defend the Japanese war criminals held responsible for the torture and deaths of millions of civilians and prisoners of war. She recounts the post-WWII transition in Japan to the country's occupation by their former enemy, and the subsequent surprise on the part of the Japanese citizenry that the U.S. allegiance to democracy meant providing a fair trial even to the men considered the most evil perpetrators of atrocities. In letters to her family at the time, the author as a young woman tries to explain her ...(interactions) with the defendants and her own surprise at the growing fondness she felt for many of the "villains" of WWII - particularly premier and general Hideki Tojo.

Fischel interweaves the ... trial alongside her tales of travel throughout Japan, her social engagements with high-ranking military and civilians, and her unique enduring relationships, such as her friendship with Emperor Hirohito's brother, Prince Takamatsu. In doing so, Fischel illuminates the paradoxes inherent during this period in history.

My comments: I was fascinated by the title of the book, the chance to read an inside and personal account of this period in American and Japanese history.  I found a few gems, including the author's questioning the role of Russia as one of the countries involved in the Tokyo Trials against Japan. Russia was an ally of Japan until just before the end of the war and was involved in the deaths of hundreds if not thousands of Chinese in Manchuria, yet was invited to sit in trial against Japan but not as a defender itself in war crimes.

Another gem was her account of General Tojo's testimony as the number one war criminal at the trials.

Before a full house replete with reporters, Tojo testified how the Japanese had been forced to go to war because of America. America had given Japan an ultimatum about China. The Americans told Japan to get out of China or they would not have access to any of the world's oil. However, the Japanese had been fighting in China for more than ten years and invested significant military and economic resources in this battle. Japan was not amenable to being threatened or forced to leave. (p. 231, ch. 15)

Some of the top level war crime defendants, the A-level group, said as part of their defense that they had no personal involvement in the atrocities committed during the war and lay blame for military aggression on military cliques and on the Japanese Navy.

I admit I am not a historian and don't have knowledge of the facts outside of Fischel's book, though many of these historical accounts of the Tokyo Trials exist. I can understand her wish to leave a detailed account of her experience with the defense team as a legal stenographer. I think her book is valuable as a part of the history of the proceedings, from a personal point of view. Fischel has included numerous newspaper accounts of the trial, personal letters written to her by the defendants, their relatives, and many other people involved. Letters include some from the Emperor's brother, Prince Takamatsu, who was not a part of the trials.

Historians of the period would find her book a useful addition to the body of work that already exists. General readers will find it interesting and controversial at the same time. I cannot accurately rate the historical value of her account, but from a general reader's point of view, I would give her book a 4.5 out of 5 stars.

This sounds like a wonderful book right up my alley. Great review, I will put it on my "to read" list.

I also tweeted this review to my following.

This is very intriguing indeed and one that I think my husband would be interested in reading.

Sounds fascinating. Thanks for the introduction.

I'm reading this book right now, and I also am fascinated, especially how she went from being angry at the Japanese to actually befriending those on trial. I've linked to your review on War Through the Generations.

Thanks for the link, Anna. Your challenge is a great one, War through the Generations!