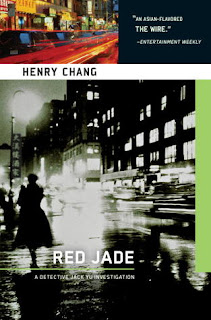 Comments: Interesting mystery that gets the reader into the world of Chinatown tongs and the criminal underworld they run. In Red Jade, The bodies of a man and his wife are discovered in a case that looks like a murder-suicide. Detective Jack Yu had been transferred from working in Chinatown, but the family of the victims asked for him to be recalled to do the investigation.

Pretty soon, Jack is also searching for a Hong Kong woman who disappears from Chinatown, escaping from the Chinese underworld with a stash of gold coins and a "fistful" of diamonds. She is one of the more intriguing characters in the novel. She is resourceful about hiding from the criminal elements hunting her down as she escapes from New York to Seattle, trying not to stand out or be discovered by the tongs.

"She had a lot of different jewelry. I remembered, but she always wore a jade charm. Hanging off her wrist. It was white and gray, with pa kua, Taoist, designs on it. Round, like a coin, a nickel." (p. 55)

Detective Yu takes us through Chinatowns in New York and Seattle - pawn shops, jewelers, restaurants, temples, while introducing the Cantonese and Toisanese dialects.

Publisher's description: Two bodies are discovered at an address on the Bloody Angle, Chinatown's historic Tong battleground. NYPD Detective Jack Yu's investigation takes him across the country to another Chinatown, this one in Seattle, in pursuit of a cold-blooded Chinese American gangster and a mysterious Hong Kong femme fatale


The Chinese cop, Tsai remembered, the American-born Chinese, the jook sing, empty piece of bamboo. They (the defense lawyers) would dredge up his tainted career, his Chinatown misadventures, and destroy his credibility. (p. 56)

About the author: Henry Chang was born and raised in New York's Chinatown, where he still lives. He is a graduate of Pratt Institute and CCNY. He is the author of Chinatown Beat and Year of the Dog, also in the Detective Jack Yu series.