Book Review: Cat Sitter among the Pigeons by Blaize Clement 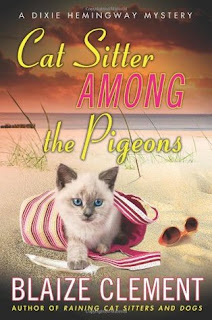 
The men in the backseat released their hold on me. One of them turned his head toward me and spoke through the slit in his mask.
"I guess we made a mistake." He sounded hopeful, as if he thought I might forget the whole thing.
The other one said,"Vern, what're you going to do with her?"
I wanted to know that myself. (ch. 3)

Comments: I always enjoy the pet sitter mysteries by Clement. Her character, Dixie Hemingway, lives on Siesta Key (fictional, I think) in Florida and takes care of pets twice a day, early in the morning from 4 a.m. to 10 a.m., and again in the afternoons. Her charges range from regular cats and dogs, to parrots, iguanas,  etc. You read about the different animals she feeds, walks, and grooms, in the six books in the series. Dixie draws the line at snakes, however, and hands over those jobs to other pet sitters. She often comes across dead bodies (of humans) while doing her job and solves these mysteries as a great amateur sleuth. Her love interest is the detective in the town, Guidry.

Product Description:  "In the sixth installment of the mystery series, Dixie is caring for the cat of a prickly old man whose granddaughter shows up with baby in tow. Dixie desperately tries to save this young woman and her infant from murderous con-artists ready to kill in order to hold on to the millions they stole from naïve investors. The villains, though, are not run-of-the-mill criminals; they are among the socially prominent movers and shakers in Dixie’s town.

Dixie must confront her greatest fears and try to save the lives of the innocent, both two-legged and four."

About the Author: This is the sixth novel in BLAIZE CLEMENT’s Dixie Hemingway mystery series. The author lives in Sarasota, Florida.
at February 23, 2011

I think I'd enjoy reading this series. Thanks for telling me about it - a new one to me.

Gosh I read the first in this series and then kind of forgot about it. I should get back to Dixie.