A Thread of Sky by Deanna Fei 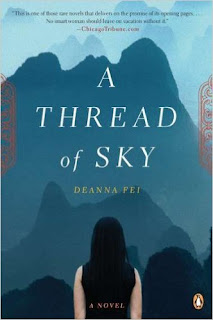 A Thread of Sky: A Novel

Publisher's book description: "As Irene Shen’s husband of thirty years was leaving her, she shut the door behind him and said, “Good riddance,” to the eye-rolling of her three daughters. But when he dies suddenly in an accident, her oldest daughter Nora withdraws to her high-powered Wall Street job and troubled relationship; her strong-willed middle child Kay heads to China to discover her family’s heritage; and the youngest, Sophie, a sensitive art student, is trapped at home until college starts.

With her family in pieces, Irene starts organizing a tour of mainland China for her three daughters, her poet sister, and her eighty-year-old mother. As the three generations of women tour China, from the Great Wall to downtown Shanghai, each woman begins to uncover secrets. And slowly find their way toward a new understanding of themselves and each other.

Partly inspired by Deanna Fei’s own travels through China, A THREAD OF SKY is a story about love and sacrifice, history and memory, sisterhood and motherhood, and the connections that endure."

About the Author: Deanna Fei was born in New York, and has lived in Beijing and Shanghai. A graduate of Amherst College and the Iowa Writers’ Workshop, she has received a Fulbright grant and a New York Foundation for the Arts fellowship. She lives in Brooklyn.
- April 20, 2011