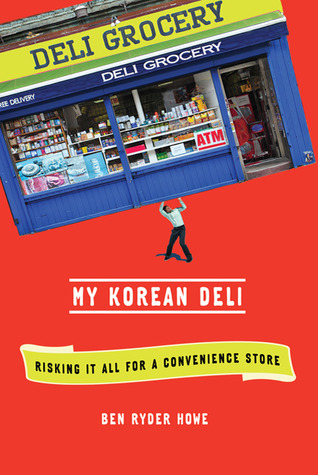 From the new memoir, My Korean Deli: Risking It All for a Convenience Store

"Last summer my wife's family and I decided to buy a deli. By fall, with loans from three different relatives, two new credit cards, and a sad kiss good-bye to thirty thousand dollars my wife and I had saved while living in my mother-in-law's Staten Island basement, we had rounded up the money. Now it is November, and we are searching New York City for a place to buy." (ch. 1)

Publisher's description: "It starts with a gift, when Ben Ryder Howe's wife, the daughter of Korean immigrants, decides to repay her parents' self-sacrifice by buying them a store. Howe, an editor at the rarefied Paris Review, agrees to go along. Things soon become a lot more complicated. My Korean Deli follows the store's tumultuous life span, and along the way paints the portrait of an extremely unlikely partnership between characters with shoots across society, from the Brooklyn streets to Seoul to Puritan New England. Owning the deli becomes a transformative experience for everyone involved as they struggle to salvage the original gift—and the family—while sorting out issues of values, work, and identity."

Comments: A cute, amusing memoir about family, culture, and a financial attempt in the diverse city of New York.

About the author: Ben Ryder Howe is a former senior editor of The Paris Review and has written for The New Yorker, The Atlantic Monthly, and Outside. His work has been selected for Best American Travel Writing.  He and his family live on Staten Island.
at May 19, 2011

I have a copy of this one too. I'm hoping to be able to get caught up on my review books this summer.

I definitely want to read this one soon - I really enjoy memoirs - combine that with an immigrant stories and I am sold!

Thanks for linking this up to the Immigrant Stories Challenge

This oe sounds great, will be looking for it. Thank you for the review!