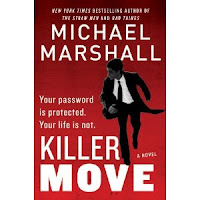 Comments: An unusual thriller, noir, with a plot that involves a lot of high tech computer savvy. The book seems to be making a comment on how people can use computer technology to manipulate, change, and even destroy other people. A little frightening too, in this respect. A good read for those who like techno-thrillers and psychological suspense.

Product description: A creepy, fast-paced thriller... Bill Moore's got a lucrative job selling condos in the Florida Keys, a successful wife, a good marriage, a beautiful house. He also has a five-year plan for super success, but that plan has begun to drag into its sixth year without reaping its intended rewards. So now Bill's starting to mix it up—just a little—to accelerate his way into the future that he knows he deserves.

Then one morning Bill arrives at work to find a card waiting for him, with no indication who it's from or why it was sent. Its message is just one word: modified. From that moment on, Bill's life begins to change.

At first, nothing seems very different. But when things begin to unwind rapidly, and one after another, people around Bill start to die, it becomes increasingly clear that someone somewhere has a very different plan for Bill's future. Confused and angry, Bill begins to fight against this unseen force until he comes to a terrifying, inescapable realization: Once modified, there's no going back.
- July 13, 2011