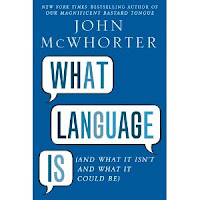 If there was grandeur in Darwin's view of life, there is certainly nothing grand in that glum view of language. It neglects so much beauty and so much complexity. And luckily, it's inaccurate." (Epilogue)

Title: What Language Is (And What It Isn't And What It Could Be) by John McWorther

Objective rating: 4.5/5
Comments: This book on languages reads to me like a reference book that I can pick up and read at any time and at any chapter. The author explains his view of language in five chapters titled Ingrown, Dissheveled (sic), Intricate, Oral, and Mixed. An expert on dialect, McWhorter tells us about the differences between "real" languages such as English, Chinese, Japanese, Korean, Arabic, Hebrew, Persian, and Hindi and dialects like Black English, Haitian Creole, Jamaican patois, and Philippine's Tagalog, among many others.

As a linguist, he compares languages and dialects, shows us their intricacies, and sees the beauty in their make-up. He also says that language is essentially oral, not written. There are too many interesting tidbits on language to show them all here, but it's a good book to have on hand for those times I become more curious about language in general. This is a great book for students of linguistics, by the way, as it does become quite technical.

Another interesting tidbit for the general reader:

"Black English is not "bad grammar" under any logical conception - unless we can seriously condemn our own mainstream English as crummy Anglo-Saxon....The proper idea is that many people will be bidialectal, using Black English in casual settings and the standard in formal ones - as a great many already do and always have." (ch. 3)
About the author: John McWorther is author of Our Magnificent Bastard Tongue: The Untold History of English, and the New York Times best seller, Losing the Race: Salf-Sabotage in Black America. He teaches linguistics and western civilization at Columbia University.
For a list of reviews of What Language Is, visit other reviews of this book on TLC Book Tours
- August 15, 2011