Book Review: The Dog Who Knew Too Much by Spencer Quinn 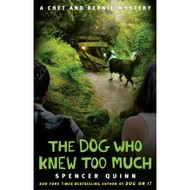 My first book in the Chet and Bernie Mystery series, and it won't be my last. I couldn't believe that Spencer Quinn could pull off having a dog tell the entire story, and do it so well. Chet is the dog partner in the Chet and Bernie private investigative duo. Bernie is his owner and boss, an ex-military man who isn't slowed down much by a slight limp.


"Chet. Are you listening, buddy?"
Of course I was listening. Didn't I always listen to Bernie? I made myself listen even harder, and right away heard distant footsteps, on some level above.(ch. 18)

In their newest case, the two are asked to find a boy missing in the mountains during summer camp. They discover the body of a camp leader, shot in the head in an old abandoned mine. When they pursue leads, both the dog and his PI partner are imprisoned. How Chet escapes and later helps Bernie to escape to solve the kidnapping and bring the perps to justice is good storytelling, dog style, of course. I also liked the humor in the novel.

Publisher's description: The fourth in the New York Times bestselling mystery series featuring canine narrator Chet and his human companion Bernie. Combining suspense and intrigue with a wonderfully humorous take on the link between man and beast.  Spencer Quinn lives on Cape Cod with his dog, Audrey. He is currently working on the next Chet and Bernie novel.

Title: The Dog Who Knew Too Much by Spencer Quinn
Publisher: Atria Books, September 6, 2011
Rating: 4.5/5
Source: Borrowed from my local library.

Email ThisBlogThis!Share to TwitterShare to FacebookShare to Pinterest
Labels: Book review, dog mystery, mystery, Spencer Quinn, The Dog Who Knew Too Much

This sounds really good. I am going to add this one to my wishlist :)

I really want to try this series. I keep hearing great things about it.

A dog tells the story? But I liked the quote you included. Seems like it might be fun.

Hm. I do like cosies, but a dog narrator? I don´t think this series is for me - though the cover is very tempting.

David read this and read a few parts out loud to me, the dog is pretty witty. Thanks for stopping by the other day. Lisa

I've been in the mood for humor in my books lately. So far I'm finding it too. I'm finding humor in the most unlikely books. I really like this one where the dog tells the story. Will write it on my list.