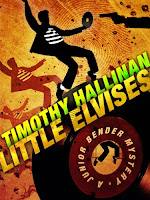 I am a great fan of satire. Jonathan Swift's books were among my favorites back  in school, though I pretty much stick with  modern books nowadays. But I was delighted to find some modern satire combined with a genre I like - mysteries - not like the classics of course, but satire that made me nod my head and chuckle.

The book was an e-Book, Little Elvises, a Junior Bender thriller by Tim Hallinan, a very modern day writer who takes off on LA and Hollywood culture in his fairly new mystery series. The writer gives a bird's eye view of the goings-on in the San Fernando Valley, in Hollywood, and in La La Land in general.

Little Elvises comes off as wry humor and is very entertaining. It's also a good thriller. It has an engaging character, Junior Bender, who is sympathetic and as honest as a professional burglar can be who works for other crooks. Even though the thriller itself is fiction,  the social commentary is there and all pervasive. I loved the irony in the humor.

Product description: 2011 Edgar and Macavity nominee, Tim Hallinan, brings back Junior Bender, a top-of-the-line burglar who also works as a private eye – for crooks, and the hero of CRASHED, the first in the mystery/thriller series.  Little Elvises is a hilarious Los Angeles thriller about old-time rock-and-roll, missing persons, the world's oldest gangster, and a terrifying if somewhat hapless hit man named Fronts.