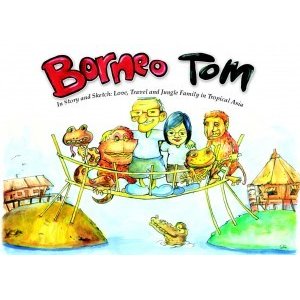 In a nutshell: A former biology teacher from Maryland and divorced father of two relocates to Malaysian Borneo, where he finds love and adventure, and documents in this book his southeast Asia observations during his travels with his adult children and his new wife. Sketches were done by Waterfront Niki of Sarawak, Borneo.

My comments: I enjoyed reading about Tom's travels throughout southeast Asia and his  lively observations about the places, people, and the wildlife of  several countries - Vietnam, Thailand, Indonesia, Burma, and Malaysia - plus his trip to Chengdu, China to see the pandas at the research center there. Each page of his book is an essay in itself, with accompanying full page sketches of Tom and the scenery. These clever and often humorous sketches were a great accompaniment to Tom's narrative.

Tom also tells us about Alfred Wallace, the little known naturalist who collected and studied animals in southeast Asia and who may have contributed significantly to Darwin's theories of natural selection described in "The Origin of Species."

Besides the local wildlife descriptions, Tom narrates about the local culture as well -  a marriage ceremony, food preparation, his courting of his present wife, and his marriage. I thought it was a really nice gesture that Tom flew his two daughters to Bali with him and his new wife during their honeymoon.

About the author: All the proceeds from Tom McLaughlin's books go toward supporting the Matang Wildlife Center, which rehabilitates orangutans and other wildlife.

This book was a complimentary copy provided for the Pump Up Your Book Virtual Book Tour of Borneo Bob, touring October to December.
- November 21, 2011