Opening Sentences: Off With His Head by Ngaio Marsh 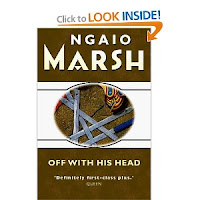 Beginning sentences: Over that part of England the Winter Solstice came down with a bitter antiphony of snow and frost. Trees, minutely articulate, shuddered in the north wind. By four o'clock in the afternoon the people of south Mardian were all indoors.

It was at four o'clock that a small dogged-looking car appeared on a rise above the village and began to sidle and curve down the frozen lane. Its driver, her vision distracted by wisps of grey hair escaping from a headscarf, peered through the fan-shaped clearing on her wind-screen. Her woolly paws clutched rather than commanded the wheel.

Comments: The atmospheric description of place and driver slowly builds up suspense. Marsh is known as a master of mysteries, and this one sounds good enough for me to borrow it from  relatives to take back on my long trip home.

Pagan revelry and morris dancing in the middle of a very cold winter set the scene for one of Ngaio Marsh's most fascinating murder mysteries. When the pesky Anna Bunz arrives at Mardian to investigate the rare survival of folk-dancing still practised there, she quickly antagonizes the villagers. But Mrs Bunz is not the only source of friction -- two of the other enthusiasts are also spoiling for a fight. When the sword dancers' traditional mock beheading of the Winter Solstice becomes horribly real, Superintendent Roderick Alleyn finds himself faced with a case of great complexity and of gruesome proportions...(amazon)
Show More
Show Less
Title: Off With His Head by Ngaio Marsh
Paperback: 304 pages
Publisher: Harper Collins Pb (August 21, 2000)
- November 28, 2011

Email ThisBlogThis!Share to TwitterShare to FacebookShare to Pinterest
Labels: British mystery, Ngaio Marsh, Off With His Head, opening sentences