Book Review - Me Again: A Novel by Keith Cronin 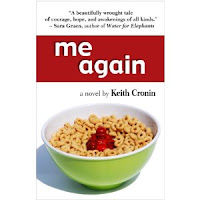 "But it's different for you than for me," she said. "I know I've changed, but it was my personality that changed - my feelings. But I didn't lose my memory. For you, it's the opposite, You did lose your memory, but you didn't change as a person"

This novel is both a love story and a story of survival, about two people who suffer life-threatening strokes that change their personalities and their lives. Jonathan and Rebecca meet during their hospital stay, at physical therapy sessions, and become friends who support each other's attempts to recover and share what they remember of their past lives.

Jonathan remembers almost nothing about his former life after awakening from a six-year long coma. He has trouble understanding numbers although he used to be a successful accountant. Rebecca has not lost her memory, but her personality has drastically changed, and she is no longer the person her husband remembers or wants.

How these two move toward each other on their way to recovery is the story of Me Again. There is some mystery involved as Jonathan is visited in the hospital by a former co-worker who  demands money he says they embezzled from their accounting clients. Jonathan also hides from his mother the fact that he does not remember her or his father, and tries to find out more about his past, including his brother Teddy and his ex-girlfriend Victoria. And he has to solve the problem of the missing money he supposedly embezzled.

Comments: This book reminds me of at least one other book on memory loss that I've read and liked - What Alice Forgot.  Both stories involved drastic personality changes, for the better, I might add. Me Again is a story of hope and determination, of loss and renewal - an inspiring book that is also a love story.

Visit the author, Keith Cronin at http://www.keithcronin.com/
I won this book through a contest held by Staci at Life in the Thumb.
- December 16, 2011