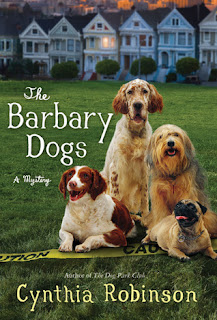 According to Wikipedia, the Barbary Coast in San Francisco is a seedy red light district. I was expecting more dogs in this mystery, as the author has written a previous novel titled The Dog Park Club. However, there is only one dog of note, a small pug owned by opera singer Max Bravo.

In this mystery, Max is conned into taking care of the affairs and funeral of a former friend, an unsuccessful writer named Frank Kelly, who jumped off the Golden Gate Bridge. Max finds Frank's journal and is immediately visited by the ghost of Baba, Max's grandmother, who frequently visits to tell Max what's going on and what to do. She thinks that the mysterious man who wrote 20 pages in Frank's journal made Frank commit suicide and will now target Max. Never mind that this man died years before Frank's time, in 1906, the year of the great earthquake in San Francisco.

There is a bit of the paranormal, a lot of Barbary Coast history and San Francisco earthquake history, descriptions of the fog of the city as well as landmarks such as the San Francisco Mission, Chinatown. The book is not just history, however, but what is described as a "quirky literary mystery," with an odd group of writers and references to literary works such as Paradise Lost.

This was a unique book, with parts that I liked as history and mystery and parts that I felt were just a long excuse to describe the city of San Francisco.  Residents and fans of SF are sure to like it.

© Harvee Lau of Book Dilettante. Please do not reprint without permission
at January 21, 2012

Not sure this one is for me, but I do like the cover. I have never been to SF, but I know a few bloggers who have, and might enjoy this one! Thanks for the great review, and for sharing your thoughts on it with us!

I think SF is one of hte happiest places on Earth, so I bet I'd love this book!

I've never been to SF, but I really want to, so I think I'd enjoy the peek into life there.

I just love those dogs on the cover!

I would probably read this book just for the cover.