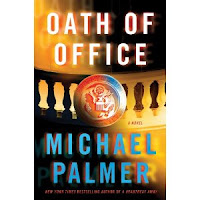 Dr. John Meacham suddenly goes berserk and shoots several of the patients in his office. Other people in King's Ridge begin to show signs of stress, lack of judgement, and extreme destructive behavior, both to others and to themselves.

In the meantime, the director of the Department of Agriculture is forced to resign due to evidence of sexual improprieties. The first lady of the U.S., Darlene, becomes involved when she receives information from an anonymous Doctor M that the agricultural director was framed. This ties in later with the bizarre behavior of the people of King's Ridge and a local corporation.

This is an environmental thriller, where the main character, Dr. Lou Welcome,is almost killed several times trying to find the link between King's Ridge and the extreme lack of judgement some of its residents are showing. Lou begins to work with the First Lady, who follows up on the tips from the mysterious Doctor M and, with her chief of staff, tries to run this evident conspiracy to the ground.

Unfortunately I knew before I started reading that the thriller involves genetic manipulation of food. The quote at the beginning of the book from Seeds of Deception about scientists inserting genes from an animal into a plant gives it away and just about tells us what the medical thriller is about. I would have preferred to have been surprised and find out later.

What's pleasantly new in the book is having a First Lady become a clandestine investigator or sleuth of sorts. What is also new is the president himself not following his Oath of Office in this dire situation. Combining DNA of animals and plants, different species, sounds potentially very scary. I think the book makes that point.

I received a complimentary ARC of this book.

© Harvee Lau of Book Dilettante. Please do not reprint without permission
at January 17, 2012

The manipulation of anything involving our food chain sounds scary to me! I think this book would be thought provoking!

I have to agree with Kathy on this one, and say that the premise sounds scary and interesting, but I don't think I would have liked everything to be spelled out for me. This book seems like it would be a good contender for a time when I want something thrilling and fast moving. Great review today. I appreciated your insight!

Very good review...I've just finished reading this, and will post my review soon. Please check it out at http://pamelareadz.wordpress.com. Thanks!

A first lady sleuth? Interesting, though I think it has been done before (I haven´t read the series, but I am sure I´ve seen it in a review of another book).

REmind me Dorte, which books have First Lady sleuths. I think I remember faintly that a female mystery writer may have done that.

Was it Margaret Truman?

Sorry, but I don´t remember. I didn´t read it, just saw a review somewhere.

I find the genetic manipulation of food scary! But I love strong First Ladies!

Michael Palmer's last three books have not only featured medicine but have a political bent, and this one goes them one better. It not only has a doctor as a protagonist (two, if you count the President's wife, a no-longer-practicing pediatrician) and is set in Washington DC with a President who has a rather unusual mindset, but it also discusses a social issue that most of us don't even think about: genetic modification of the food we eat. Frankly, I had never considered the implications of this, but after reading Oath of Office, I certainly will.