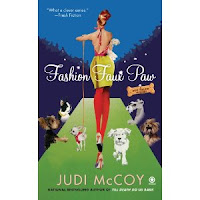 I had just discovered the Dog Walker Mystery series with this book, the sixth by Judi McCoy, and wondered how I had overlooked her books before. I am a big fan of dog and pet mysteries by authors such as Susan Conant, Virginia Lanier, Stephen Quinn, Lauren Berenson, Linda O. Johnston, Nina Wright, Sue Henry, Cynthia Baxter, and Blaize Clement. (Phew!) So I was delighted to find this author.

As soon as I had finished her new book, Fashion Faux Paw, however, a blogger informed me that author Judi McCoy had died, just this month. I am sure the mystery world will miss her. Her new book introduces her next in the series, Treated to Death, scheduled for publication October 2012. I hope we will see it in print later in the year.

About the book: Dog walker Ellie Engleman is hired to take care of dogs that will walk the runway with models in a major fashion show. Besides giving the dogs daily walks during the show, feeding and grooming them, and making sure they are hooked up with the right models during Fashion Week, Ellie finds herself playing amateur sleuth when the organizers of the show ask her to look into the death of one of the fashion designers.

Lilah Perry, a major designer, had died from anaphylactic shock during the show and everyone is convinced that she was deliberately exposed to peanut oil, which she is severely allergic to. Since Lilah was unpopular with models and designers alike in the fashion world, Ellie finds herself hard pressed to narrow down the suspects. With the help of her dog and sidekick, a mixed breed named Rudy, Ellie sets out to find Lilah's killer.

Comments: I thought the book had a clever plot and a zany animal sidekick, Rudy, who spies on the dogs in the show and gets information from them to help with Ellie's investigation. I don't normally like talking animals in mysteries, (especially talking cats), but Hugo I could put up with. He adds a certain intrigue to the book and I like that the only human he can communicate with is Ellie, who has to explain many times over why she seems to be always talking to her dog.

I'm looking forward to reading Judi McCoy's earlier books in the Dog Walker series. I know I'll enjoy them and, with her fans, wish she was still with us.

I received a complimentary review copy of this book.
- February 24, 2012