Book Review: No Mark Upon Her by Deborah Crombie 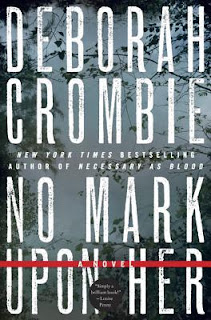 "You compromised my search." Tavie realized that passersby were giving them a wide berth and made an effort to lower her voice. "And my chain of evidence," she hissed at him....
(ch. 7)

Title: No Mark Upon Her: A Novel by Deborah Crombie
Published February 7, 2012 by William Morrow; hardcover
Genre: police procedural, mystery

Everyone on the police force on Henley-on-Thames, about thirty miles north of London, seems to be on the case, that of a woman rower found drowned and caught in a weir on the river Thames, her racing skiff washed up on shore. Scotland Yard is called in; it seems to be murder as the woman was an experienced rower training to enter the Olympics and would not have capsized the evening she took her boat out on a calm river.

Search and rescue teams had been called out, including a man with his black Labrador retriever who is devastated when they find the abandoned skiff and the body of the woman rower.

The police procedural continues with Scotland Yard Superintendent Duncan Kincaid and his wife, Detective Inspector Gemma James, both investigating the case, either directly or indirectly. For Gemma, the name of a possible suspect hits too close to home as she has had a frightening run-in with the suspect before. A close call, she realized.

Comments: About a third of the way into the novel, I thought I knew who the murderer was and the reason behind the murder and was about to skip ahead to the end to see if I was right. I'm glad I didn't, as I was totally wrong, and I soon realized this as I read on. The possibilities were many, the situations complex, and I was then kept guessing till the end.

A very satisfying mystery and police procedural, I give this one 5 stars. I'm eager to look at others in this series, and though No Mark Upon Her is a stand-alone mystery, wished I had read them before this book, for continuity.

I received a complimentary review copy of this book.
at February 10, 2012

Email ThisBlogThis!Share to TwitterShare to FacebookShare to Pinterest
Labels: Book review, Deborah Crombie, mystery, No Mark Upon Her, police procedural

I love it when a book succeeds in keeping me guessing all the way to the end, so I can see why you found this one so satisfying. It does sound like a great read, and I am really glad that you loved it. Your enticing review has me wanting to seek it out! Thanks for sharing this!

This sounds like a fascinating read. I haven't read any of this series either but your review has sparked an interest. I enjoy books that keep you guessing.

I didn't realize this is part of a series. I have it on my shelf waiting, now I'm wondering whether I should read the others first, even if it does stand alone.

Oh yes, this is a series that I've marked to read and I will make sure that I start at the beginning. Sounds good to me and that you gave it a 5 star rating speaks volumes!