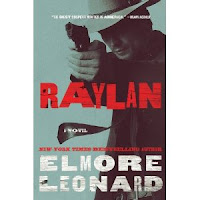 "It's so green...the trees in the hills come so close. Like they want to envelop us."

"Pretty soon," Raylan said, you'll see the ridge going bald, but it still causes people living below to fuss. Now they have bare rocks and bare earth envelopin them." (ch. 17)

Elmore Leonard from Michigan has won the Grand Master Award of the Mystery Writers of America and the Lifetime Achievement Award from PEN USA, but this is the first book of his I've read and I must say, I really enjoyed it.

The novel touches on Kentucky horse racing, modern coal mining operations and its effect on the environment, and poker playing. Leonard has it all in this book, set in Harlan County, where U.S. Marshal Raylan Givens keeps the peace. The book is really three separate stories of Raylan's detecting. The first crime involves Raylan catching the persons behind the harvesting of kidneys from doped up but live donors, who are then offered their kidneys back.... for a price. The second crime story deals with coal mining and the people involved, and the third about a young woman who would rather play poker for a living than anything else.

The local dialect and slang is used throughout the novel to add atmosphere and give authenticity and a sense of place. It is entertaining fiction that I recommend to mystery lovers.

With the closing of the Harlan County, Kentucky, coal mines, marijuana has become the biggest cash crop in the state. A hundred pounds of it can gross $300,000, but that’s chump change compared to the quarter million a human body can get you—especially when it’s sold off piece by piece.

So when Dickie and Coover Crowe, dope-dealing brothers known for sampling their own supply, decide to branch out into the body business, it’s up to U.S. Marshal Raylan Givens to stop them. But Raylan isn’t your average marshal; he’s the laconic, Stetson-wearing, fast-drawing lawman who juggles dozens of cases at a time and always shoots to kill.

The bad guys are mostly gals this time around: the nurse who collects kidneys and sells them for ten grand a piece;  a coal-mine executive not above ordering a cohort to shoot point-blank a man who’s standing in the way; and a beautiful sometime college student who can outplay anyone at the poker table and who suddenly finds herself being tracked by a handsome U.S. marshal.

Dark and droll, Raylan is pure Elmore Leonard—a page-turner filled with the sparkling dialogue and sly suspense that are the hallmarks of this modern master."

I received a complimentary review copy of this book.
- February 02, 2012