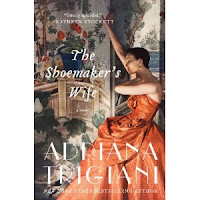 "But you love someone else,"she said, making an excuse to step away from him, even though she didn't want to.
"Sister Teresa says that when one girl breaks your heart, another comes along to mend it."
Enza smiled. (from the ARC, ch.6; final copy may differ)

A stack of vinyl records of the singer Enrico Caruso, owned by the author's grandmother Lucia, and ship records of Lucia's and her husband's separate trips to America in the early 1900s inspired Adriana Trigiani to write this novel.

This is a story of the meeting of two teens, Enza and Ciro, who live in villages at the foot of the Italian Alps, about their separate journeys to America to find a better life, their meeting again, and their married life together. It's the love story of the author's grandparents, as she imagines it might have been. The novel is a straightforward telling of their lives, set in three locations - the village of Bergamo in the Italian Alps, and then Manhattan and Minnesota in America.

In Italy in 1905, Ciro and his brother Eduardo are left by their impoverished and widowed mother at a convent, to be raised by the sisters of Saint Nicola. When the boys grow up, Eduardo enters the seminary in Rome; Ciro is sent to America to be apprenticed as a shoemaker to a relative of one of the sisters.

Before Ciro leaves, he meets a young girl Enza from the same region, but then loses track of her when he departs for America. Enza also travels to America, hoping to become a seamstress in New Jersey and send money home to help her family buy a much needed house.

Enzo and Ciro's paths cross again, several times over the years, and the rest, as they say, is history.

Many Italians left their home for America during the early 1900s, as did other European immigrants. The book helps to document one such family, in fiction, the reasons for their leaving, and their arrival and survival in America during two world wars. I found this book an excellent example of immigrant fiction and the historical novel. 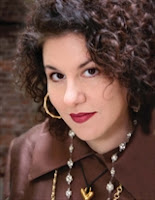 Visit the author at http://adrianatrigiani.com/

Click on TLC Book Tours for more information/reviews of The Shoemaker's Wife.

Thanks to TLC Book Tours and the publisher for an ARC of this novel.
at April 10, 2012

I have been reading a lot about this book, and really want to read it. It sounds like Trigiani really gets it right with the history and the intrigue in this tale. Great review today! I need to add this one to my list!

I absolutely LOVE your teaser! This is definitely being added to my shelf right away - thank you for sharing! :)

Ah, great snippet! I really want to read this one! I started this series with Brava, Valentine, so I'm already reading them out of order, but that's okay....

thanks for the great review...my wife has really enjoyed her books...esp the big stone gap series as it is based near us...i am sure this one will make it into our home...smiles.

I need to read something by this author! Great, concise review!

Natalie~Coffee and a Book Chick said...

I've read (listened, rather, to the audiobooks narrated by Cassandra Campbell) to two of Adriana Trigiani's books and loved them both. I've been super excited to see this book come out and I also need to try The Big Stone Gap series.

I love this author big time and this is a book I could totally get lost in!

I saw the author of this book being interviewed on the Today show. It sounds like a really good story. Loved your teaser.
Here's mine: Sandy's Teaser

This author is always great. I'm adding this one to my list.

Immigrant stories are so varied and interesting. Liking this one very much.

I do love the sound of this one -- thanks for sharing your thoughts with all of us.

I'm on this tour later this month. I can't wait to read the book!

I REALLY want to read this one. I've heard so much about it.

I agree this book did show a great example of immigrant fiction. This is probably my fav historical fiction so far this year!

My great grandparents emigrated from Italy, so I think I'd enjoy this book!

I love that she based this, in part, on her own grandparents.

Great review, I love historical fiction so I'm absolutely adding this to my wishlist.
-Kimberly @ Turning The Pages

I read two of Trigiani's works and was curious about the back story of her family. Glad this was a lovely read.

I think my favorite part of this particular immigrant story is the way Trigiani portrays Italian immigrants who loved their home but had to leave to make a living...they still love and dream about their homeland as well as seek out others with their same background, but become "Americanized" as well. They were able to evolve with the times and the environment while at the same time hold onto their home culture...I'm not explaining this very well, but Trigiani shows it perfectly :)

he Shoemaker's Wife is a beautiful and sweeping tale that will keep readers glued to every page. I became so invested in these characters and their lives that they became real to me, and I celebrated their triumphs with them and shed tears for their hardships. A truly glorious read.

Sounds like a must read for me. My grandparents came from northern Italy. My grandmother came to America in 1904 with my unlce who was an infant, my grandfather was already here. They settled in Colorado. I live in Minnesota. Thank you for the give-away.
Leona

The Shoemaker's Wife will grab your heart and make you cry with how amazing it is. I truly do not have the words to say how much I love and adore this book.